Denton’s had enough of Rope 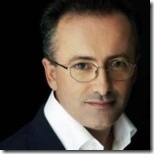 After six seasons and almost 200 episodes, Andrew Denton (pictured) has decided it’s time to move on from his weekly interview show Enough Rope With Andrew Denton.

Beginning on ABC in March 2003, Enough Rope With Andrew Denton marked a return to television after seven years for Denton.  His TV career began in 1988 as host of variety/comedy show Blah Blah Blah on ABC, followed by The Money Or The Gun and the Friday night sports show Live And Sweaty.  In the mid-1990s, Denton moved to the Seven Network with his own self-titled show that ran for two years, before moving into breakfast radio on Sydney’s Triple M with Denton colleague Amanda Keller.

On the same night that Enough Rope With Andrew Denton premiered the Seven Network launched its own talk show, The Chat Room, featuring a number of radio personalities including Keller.  The Chat Room had a short life, having proved that breakfast radio presenters don’t always translate to prime time television, but Enough Rope went on to become a consistent ratings performer for ABC with Denton’s interviewing style becoming a hit with viewers.

Enough Rope has attracted acclaim for its high-profile guests from a range of fields including politics, business, entertainment, sports, the arts and medicine.  The program has also featured people behind major news stories, such as Joanne Lees, the partner of abducted English tourist Peter Falconio, and Major Michael Mori, the military lawyer for former Guantanamo Bay detainee David Hicks.

And part of the charm of Enough Rope was not just its high-profile guest list, but also in featuring ‘ordinary’ Australians, from less-glamorous fields, such as nurses, cab drivers, priests, driving instructors and butchers, all of whose stories could be as equally enthralling as those of the big-ticket names.

The program also staged a ten-year reunion of cancer sufferers featured in an earlier Denton documentary, The Topic Of Cancer, and has taken the show out to regional Australia, to towns such as Rainbow and Mt Isa, to give a unique insight into rural Australia.

This year, Enough Rope also featured a special series of episodes, Elders, featuring interviews with some of our most prominent older citizens.  And Denton was nominated earlier this year for a TV Week Gold Logie award as Most Popular Personality on Australian Television.

In moving away from Enough Rope, Denton is keen to pursue other projects behind the cameras with his company Zapruder’s Other Films.  The company has already turned The Chaser into a household name with CNNNN and The Election Chaser, and also had success this year with The Gruen Transfer, going behind-the-scenes in the advertising industry.

The final episode of Enough Rope With Andrew Denton appears on Monday 8 December on ABC1.

Permanent link to this article: https://televisionau.com/2008/10/dentons-had-enough-of-rope.html