Tag: The Chaser’s War On Everything

Actress, model and lifestyle blogger Annalise Braakensiek has died suddenly at the age of 46. Police and ambulance crews found her dead in her apartment on Sunday afternoon after friends and family became concerned about her whereabouts. A model since her teenage years, Braakensiek’s big break came when she was awarded Inside Sport Model of the Year …

END_OF_DOCUMENT_TOKEN_TO_BE_REPLACED

Permanent link to this article: https://televisionau.com/2019/01/obituary-annalise-braakensiek.html

END_OF_DOCUMENT_TOKEN_TO_BE_REPLACED 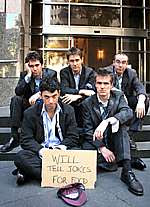 Australians love their comedy on TV, but in the last couple of years, apart from a few stand out successes like Spicks & Specks and Thank God You’re Here, there wasn’t a great deal to laugh about. Then 2007 came along and the tide was turning. ABC‘s The Chaser’s War On Everything was plucked from …

END_OF_DOCUMENT_TOKEN_TO_BE_REPLACED

Permanent link to this article: https://televisionau.com/2007/12/the-year-that-was-4-lots-of-laughs-in-07.html