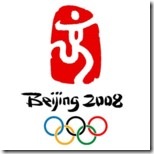 The Games Of The XXIX Olympiad have kicked off in Beijing in an opening ceremony exhibiting Chinese history and culture in a show of technical marvel and precision.

Now, for the next two weeks, Australian viewers will be served by wall-to-wall coverage across two networks, Seven and SBS, both promising around fourteen hours a day of coverage. Plus there is radio coverage and Seven’s Olympic program is also being made available via a certain mobile telephone provider. Meanwhile, a mountain of websites are being updated constantly with all the latest news, controversies and results.

It’s easy to take this level of coverage for granted but of course it was not always this way. 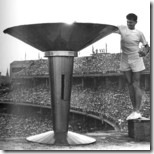 The first Olympic Games to be televised in Australia were, of course, the Melbourne Games of 1956 (athlete Ron Clark lighting the Olympic cauldron at the opening ceremony, pictured) with channels ABV2, HSV7 and GTV9 all barely on the air, and yet providing hours of coverage each day.

But later Olympic Games would be held in Rome (1960) and Tokyo (1964) and saw the various networks embark in a rare co-operation to get coverage back to Australia, but even then the amount of coverage was extremely limited and film would arrive in Australia for screening whole days after the events took place. 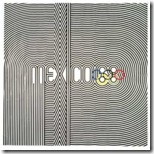 Forty years ago, October 1968, the Games Of The XIX Olympiad (official Games poster, pictured) were held in Mexico City. Bringing Olympic Games coverage to Australians was again a co-operative effort between ABC and the commercial networks, but the cost of using the fledgling satellite technology was extremely prohibitive and the networks had to rely on film being sent over from Mexico. 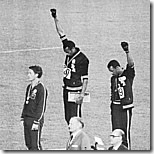 For the next two weeks, Olympic Games coverage consisted only of nightly half-hour highlights packages, aired late at night on ABC, HSV7 and GTV9. ATV0 had elected to screen their Olympics segments in the mid-afternoon, often incorporating them into their afternoon coverage of horse racing, and also featuring more reports in their evening 6.00pm news.

The Olympic Games closing ceremony aired on Wednesday 30 October, three days after it took place in Mexico City, in a 40-minute program at 10.35pm on ABC and half-hour programs on HSV7 at 10.45pm and GTV9 at 11.15pm. ATV0 included highlights as part of the next day’s coverage of the Warrnambool races.

The move to receiving Olympic Games coverage via satellite was made with the Munich Games in 1972, with ABC and Seven jointly screening live and delayed coverage. Then in 1976, ABC, Seven and Nine formed a joint coverage for the Games in Montreal, again with limited highlights packages sent via satellite. Despite the joint venture, Nine stirred the pot somewhat by also breaking away from the arrangement to provide their own additional coverage not seen on the other networks. And with a lot of their exclusive coverage being shown overnight, Nine used the Olympic Games to serve as a launch to 24 hour transmission in Sydney and Melbourne.

In 1977. the Seven Network signed a landmark $1 million deal to have exclusive coverage rights to the 1980 Olympic Games in Moscow, which included a mix of both live and delayed satellite coverage.

Having successfully taken control of Network Ten stations in Sydney and Melbourne, Rupert Murdoch scored the rights to the 1984 Los Angeles (for a reported $10 million) and 1988 Seoul Olympic Games for the network, for both Games promising in excess of fourteen hours a day of live coverage. Coverage of the two Olympiads helped the network score among its best ever ratings to date.

Then in 1989, Christopher Skase‘s Seven Network secured exclusive rights to the Games from Barcelona in 1992 for a mere $40 million, followed by Atlanta in 1996 and Sydney in 2000. For the Sydney Games, Seven and its then pay-TV channel C7 provided round-the-clock coverage, and for Seven earned the highest ratings for any telecast ever in the history of Australian television.

For the 2004 Olympic Games in Athens, Seven no longer had the C7 venture, so they entered into partnership with multicultural broadcaster SBS to provide joint coverage, with Seven focusing more on the big ticket events, and those featuring Australian competitors, with SBS taking on an alternative range of events. This same arrangement has come into play with the Olympic Games from Beijing, but for the next Olympic Games in London in 2012, Australian television coverage will be between the Nine Network and pay-TV operator Foxtel.

The Games Of The XXIX Olympiad, daily to 24 August. Seven/SBS

Permanent link to this article: https://televisionau.com/2008/08/tv-and-the-olympic-games.html