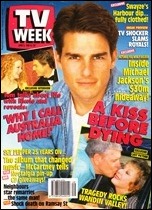 Shirl crashes out
When she decided to leave A Country Practice after more than ten years, Gold Logie winner Lorrae Desmond conceded that her character Shirley Gilroy had to be killed off but insisted that the death not be depicted on screen. “You don’t get divorced in Wandin Valley,” she told TV Week. “So for me to leave the series, Shirl had to die. I didn’t want to do a Molly (Anne Tenney) – the long, lingering leukaemia bit, because I hate to upset children. I like children. The last thing I wanted them to see was Shirley laughing.” The last viewers will see of Shirley will be farewelling her husband Frank (Brian Wenzel) from a taxi as she departs for the airport for a light aircraft flight to Brisbane. Viewers will not see the plane crash that follows, killing all on board.

Ian keeps an eye out for clues
With his new murder mystery show Cluedo about to debut, and with a second series already given the green light, as well as three sitcom projects in production or development – Let The Blood Run Free, Newlyweds and Bingles – Ian McFadyen is one of the busiest people in television. “Cluedo is not a quiz show,” he told TV Week. “It’s a game show, but a different kind of game show. It’s not based on how loud you can scream or how much jelly you can tip on each other.” It’s also a busy time for Andrew Daddo, who plays the role of Professor Plum in Cluedo, as he’s also scored a major role in the upcoming $3.7 million children’s series Round The Twist. “It’s been a bit tough to work the production schedules out because there will be some overlap,” Daddo said. “When Round The Twist came up, I jumped at it. But I’m also rapt that Cluedo is going again.” Return engagement!
Neighbours stars Tom Oliver and Anne Charleston are engaged to be married in the long-running series – and it’s not the first time the pair have played a married couple on screen. Back in 1968 they played husband and wife (pictured) in an ABC drama, The Shifting Heart. “It was a TV adaptation of a play on the ABC,” Oliver told TV Week. “It was a marvellous play and it was the first time Anne and I worked together.” However, the on-screen union in Neighbours could be short lived, as Charleston contemplates the possibility of a life away from Ramsay Street when her contract expires later in the year. “Seven and a half years is a long time. But you just never know,” she told TV Week. “It depends how you’re feeling at the time.”

Briefly…
There could be changes afoot for Network Ten dramas Neighbours and E Street, with network managing director Gary Rice putting the pressure on Neighbours’ producers Grundy Television to improve the show’s falling ratings, and expressing concern about E Street whose future is currently up for negotiation. TV Week suspects an upheaval for both shows, with Neighbours to be shifted to 7.30pm and E Street re-worked into a half-hour format at 8.00pm, five nights a week. 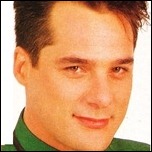 The cast of Nine’s steamy drama Chances have partied to celebrate the completion of 100 episodes. Meanwhile, the series has welcomed new cast member Steven Whittaker (pictured), who plays the part of Sean Becker, a friend of Alex’s (Jeremy Sims) who is set to threaten his corporate position. Whittaker, who recently starred in mini-series Good Vibrations, contemplated having to tackle Chances’ steamy sex scenes. “I gave it a great deal of thought but in the end it was some of those elements which were actually attractive,” he told TV Week. “Would I prefer it to be mundane, dealing with slices of suburban life, or slightly off the wall, verging towards the bizarre? In the end, that’s what made my mind up. That’s where I’d rather be. The potential is there for quite a bit of bed wandering, but at the moment there is more appetite than action!” 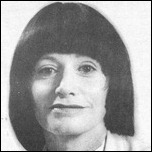 The life of controversial radio and television personality Mary Hardy (pictured) is being portrayed in a stage production, Mary Lives!, written by her brother, Frank Hardy. Starring Maryanne Fahey in the lead role, the play also features Bartholomew John and Ron Challinor, both of whom were close friends and former colleagues of Hardy, who died in 1985. “She was tremendously influential at the time, creating an awareness of me not only on the Penthouse Club, but on her radio program as well,” John told TV Week. “Mary wasn’t just a female comic,” said Challinor, who was a writer for Penthouse Club in the 1970s. “She sang, she danced, she told gags and she had great timing.  If she had done in the US what she did here she would have been a huge star.”

SBS is set to mark the 40th anniversary of the reign of Her Majesty Queen Elizabeth II with a controversial British documentary, Queen Or Country? The special, originally screened on Channel 4 in the United Kingdom, raises the question of whether the royals abuse their public position for personal gain – looking at 10 cases where the line may have been blurred.

Lawrie Masterson: The View From Here
”Taking an old, tried and true board game such as Cluedo and adapting it to television sounds easy. But obviously it wasn’t that easy at all, even for Crawford Action Time, a partnership between this country’s most prolific drama producer, Crawfords Australia, and British-based game show producers Action Time. From initial impressions, the television version of Cluedo is a touch unsatisfying, right down to the fact that the smartest guy in the audience isn’t even asked how he reached his conclusion, and nor are we told how long it took him. And perhaps it’s the “how long” factor that is most important here – not for solving the whodunit, but for the television program itself. Versions of Cluedo produced by Action Time for other countries run only half an hour, not the full hour (less commercial breaks, of course) the show has been given here.”

Program Highlights (Melbourne, June 7-13):
Sunday: Sunday night movies are Betsy’s Wedding (Seven), Robocop 2 (Nine) and Born On The Fourth Of July (Ten). After the movie, Nine crosses to Paris for the final of the French Open.

Tuesday: In A Country Practice (Seven), Frank Gilroy (Brian Wenzel) receives news that his wife Shirley (Lorrae Desmond) has died in a plane crash. In GP (ABC), William (Michael Craig) is shocked to find that his old friend Geraldine (Jennifer Claire), for whom he has developed a romantic interest, is passively committing suicide. Beyond 2000 (Seven) presents a special edition from the International Earth Summit in Rio de Janeiro.

Wednesday: The Nine Network presents the first episode of murder mystery game show Cluedo, featuring host Ian McFadyen and guest star Rod Mullinar as the show’s first ‘victim’. Seven presents a rerun of the British documentary Elizabeth R (originally shown on ABC), documenting a year in the life of Her Majesty Queen Elizabeth II, to mark the 40th anniversary of her accession to the British throne.

Thursday: SBS presents early morning (3.00am) coverage of the opening ceremony of the Euro 92 soccer championships, live from Sweden, followed by the first match – Sweden versus France. SBS’ coverage of Euro 92 continues over 17 days, with live coverage overnight and highlights packages shown the following evening.