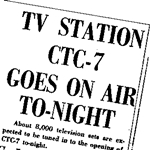 Canberra may be the national capital of Australia and the hub for the country’s political decision makers, but it was the second last capital city in Australia to receive television. Almost six years after television made its official debut in Sydney and Melbourne, television came to Canberra on 2 June 1962 with the official launch …