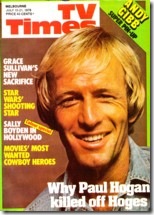 Let ‘er RIP!
After forty episodes over five years, Paul Hogan (pictured) has decided it was time to let his classic ocker ‘Hoges’ – his trademark football jersey, shorts and boots – lay to rest. Now, the emphasis on The Paul Hogan Show will be on the caricatures based on either real-life figures, such as Don Lane or ABC adventurer Harry Butler, or more of Hogan’s unique characters to go along with Luigi the Magician, Nigel the skateboard kid or Stung the derelict. Hogan, married with five children, and co-star and producer John ‘Strop’ Cornell, are knocking back offers to do more commercials after the success of the famous cigarette campaign they have both appeared in. The pair have also had movie offers – most have been knocked back, but two are still being considered. “I’d like to take advantage of doing a film,” Hogan says. “I’m wide open but there’s no way I’d do a Carry-On-Up-The-Khyber production.”

UK comedy Aussie style
British comedy writers Johnny Speight and Ray Galton are writing a new comedy series for the 0-10 Network. The Tea Ladies will be a ‘conversational comedy’ based around a pair of Parliament House tea ladies. The new series, being produced by McCabe-Paradine for 0-10, will go into taping in September. 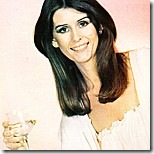 It’s Miss Wran if you please!
Kim Wran (pictured), of The Young Doctors, has some very definite views on marriage: “A woman should be independent. I’d never get married unless I had $100,000 of my own. And then if I were ever in the position of being 45 to 50, and my husband said ‘You’re not young any more and I’m going off with a girl of 25,’ I wouldn’t have to hang on. I wouldn’t lose my pride or dignity.” The 23-year-old actress, who also happens to be the daughter of NSW premier Neville Wran, is equally as indignant if anyone dares address her as ‘Ms’, “I can’t figure out why people call me that. I’m Miss Kim Wran! The women’s lib bit isn’t really for me. Men should be men, and women should be women. Equality in jobs is great, though some women shouldn’t be in the jobs that they are.”

New tragedy for Grace Sullivan
Grace Sullivan (Lorraine Bayly) gets the news that she has been dreading but half expecting. Her only remaining civilian son, Terry (Richard Morgan), who was rejected from the Air Force on medical grounds, has joined the Army. In episodes of The Sullivans to screen during this week, Terry’s impulse decision came after Michael Watkins (John Walton) has joined up after a long battle to get out of his civilian job.

Viewpoint: Letters to the Editor:
“It is disgusting that a program the quality of Space 1999, should be degraded by Melbourne’s HSV7. It is evident that they have no time for science fiction. Or, they do have time for it but at 12 midnight it is hardly fair that youngsters and adults alike should have to stay up that late.” M. Savage and A. Best, VIC.

“In these days of bad grammar and slovenly speech one would presume that a former schoolteacher would know how to correctly use the Queen’s English. However, on Pot Of Gold we heard Bernard King boast many times that in his early years he was a schoolteacher. He was giving judgment on one of the show’s contestants, and passed this jarring remark: ‘She would not be good enough for the Roxy or I’ ! Not good enough for I! Bernard, your illiteracy is showing.” H. McNeill, NSW.

“Why did ABC drop such a terrific show – Flashez? Twice I wrote to them and I received answers saying they could not do anything about it. We now have to watch British shows which are not as entertaining as Flashez. Why pay the British when ABC could air Australian shows?” G. Chewlun, QLD. 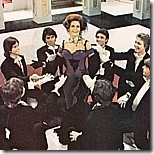 What’s On (July 15-21)
Saturday night, ABC presents another episode of The Saturday Show (pictured), with guest star Johnny Lockwood, followed by current affairs with Four Corners, and then six hours of golf with the British Open Championships, live from Scotland.

On Wednesday night, ABC presents the final of quiz show Mastermind. Four contestants from the semi-finals will compete for the title Mastermind of Australia 1978.