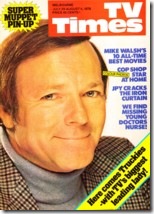 Cover: Mike Walsh nominates his ten all-time favourite films. Among the list are The Sound Of Music, Cleopatra, Singin’ In The Rain, The Getting Of Wisdom and Gone With The Wind. Dramatic ABC switchABC has announced a dramatic change to its prime-time line-up with plans to schedule drama and comedy programs in the 7.30pm timeslot, …

END_OF_DOCUMENT_TOKEN_TO_BE_REPLACED 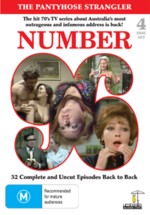 Umbrella Entertainment’s second Number 96 DVD release, centred around the Pantyhose Stranger storyline, is set for September.  It is available to pre-order at online retailers such as Sanity, JB and Ezydvd as well as from Umbrella directly. Number 96: The Pantyhose Strangler features 32 episodes from the hit series, spanning a period from late 1974 …

END_OF_DOCUMENT_TOKEN_TO_BE_REPLACED

Permanent link to this article: https://televisionau.com/2008/07/pantyhose-strangler-strikes-in-september.html