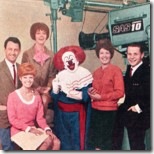 FLASHBACK #46: Lots of smiles at the studios of Adelaide’s SAS10 on the occasion of the station’s first anniversary in 1966.  Pictured, left to right, are local presenters Roger Cardwell, Gail Spiro, Penny Ramsey, Bobo The Clown, Michelle Kenny and Paul Griffiths.  SAS10 launched on 26 July 1965, and within its first year had launched a number of local productions including Bobo The Clown, Romper Room, Today and the evening news.  Later productions included Fat Cat And Friends, Earlybirds, Crackerjack, Trax, Touch Of Elegance, Junior Jury and annual Christmas telethon. In 1987, SAS made TV history when it changed frequency and affiliation to Seven.  In 2005, SAS7 produced a special, Made In Adelaide, to commemorate 40 years of television from SAS.  Picture: TV-Radio Guide, 31 July 1966.  (Go to https://www.televisionau.com for enlarged picture)

Permanent link to this article: https://televisionau.com/2008/07/televisionau-update-13-jul-08.html