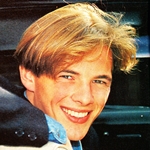 Dieter Brummer, best known as Shane Parrish in Home And Away, has died at the age of 45.

He is reported to have been found by police doing a welfare check at his home. His death is not being treated as suspicious.

Brummer was 16 years old when made his acting debut as Shane Parrish in Home And Away. He became one of the show’s major drawcards and teen idols, and Shane’s pairing and eventual marriage to Angel Brooks (Melissa George) made them Home And Away‘s most celebrated couple. He collected two TV Week Silver Logies for Most Popular Actor and was nominated twice for the Gold Logie before leaving the series in 1996, after 864 episodes. He later starred in the soap opera parody Shark Bay (pictured below) for Foxtel and other credits included Medivac, The Man From Snowy River, A Model Daughter: The Killing of Caroline Byrne and Crash Palace. He starred in the Nine Network series Underbelly and also had roles in Rescue Special Ops, Neighbours and Winners And Losers.

He was a contestant in the reality show Celebrity Circus and in a celebrity challenge on Sale Of The Century. He was a presenter on a 1996 special The World’s Greatest Nude Moments and appeared, as himself, in the comedy series Review With Myles Barlow. Permanent link to this article: https://televisionau.com/2021/07/obituary-dieter-brummer.html