Despite recent turbulent times in their relationship, Home And Away‘s Shane (Dieter Brummer) and Angel (Melissa George) are to become engaged in episodes to air this week. Shane takes Angel to a jewellery store and he asks her whether she likes a specific ring, then pops the question. Angel doesn’t say yes immediately and fans will need to wait a few episodes to find out why. But despite the smiles of the happy couple, not everyone in Summer Bay is happy about the engagement. “The adults don’t like the idea, and Alf (Ray Meagher) tries to turn her off it,” George told TV Week. For fans it will still be a while before they see their favourite couple tie the knot. “She agrees to marry him only after they finish their HSC,” George said. “Angel’s a sensible girl!”

Law’s appealing new cast
A major shake-up is coming to Nine‘s Law Of The Land with a raft of new cast members. Joining original cast member Lisa Hensley are Peter O’Brien (Neighbours, The Flying Doctors), Michael O’Neill (GP), Ally Fowler (Sons And Daughters, Neighbours) and Tessa Humphries (Sons And Daughters). O’Brien, who has returned from working in the UK, was initially reluctant to commit to another series. “I’ve got to say that it can be really s***house doing a long-running job,” he told TV Week. “I get bored very easily. It can also be difficult if you’re forced to work with someone who is hard to get along with. As far as Law Of The Land is concerned, there hasn’t been the slightest problem. The cast is great and the storylines have certainly kept me interested.” O’Brien comes into Law Of The Land as hot shot lawyer Andy Cochrane and it is revealed that Andy and Kate (Lisa Hensley) had a fling when they were younger, leading to an underlying sexual tension between them. Law Of The Land returns with a two-hour episode before settling into a regular one-hour timeslot. 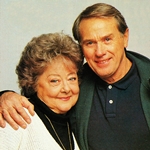 It will be a brief reunion for former Cop Shop stars Terence Donovan and Moya O’Sullivan as they cross paths on the set of Neighbours. Just as O’Sullivan joins the series as Marlene Kratz, Donovan’s four-year stint as Doug Willis is coming to a close, but he is unsure how the writers will determine Doug’s exit. “If they like you, they blow you up and kill you,” he told TV Week. “If they really like you, they send you away to Darwin or Tasmania — just in case they want to resurrect you as a long-long brother.” O’Sullivan fondly remembers their time on Cop Shop. “It was enjoyable working together all those years ago on Cop Shop,” she said. Donovan added, “Cop Shop was a very bright team of people, an older team who were fun-loving and close knit.” 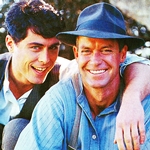 “‘Slow’ and ‘predictable’ usually don’t go with ‘thoroughly enjoyable’, but that’s the way it panned out for me with The Battlers (starring Marcus Graham and Gary Sweet, pictured). Even without the benefit of having read the late Kylie Tennant‘s novel about itinerant life during the Great Depression, on which this South Australian Film Corporation production is based, the outcome of the mini-series becomes inevitable almost the minute you see the first few frames, and there’s not a lot of surprise in between.”

Saturday: The 1953 film Jedda (12pm, ABC) and 1980 film Manganinnie (12.30pm, SBS) are screened as NAIDOC Week comes to a close. In A Country Practice (7.30pm, Ten), Matron Sloan (Joan Sydney) has concerns for a young intellectually disabled girl when she arrives for a regular check up. 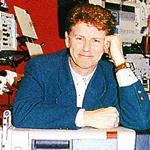 Monday: Ronnie Burns‘ (pictured) new game show Strike It Lucky (5pm, Nine) makes its debut. In Talk To The Animals (7.30pm, Seven), Kelly Pummeroy meets the handler responsible for training a dog featured in the mini-series The Battlers, Dr Harry Cooper takes one of his horses to a special clinic, and Jane Holmes visits the Sydney Aquarium to see an exhibition designed to highlight the potential effect of pollution on the Great Barrier Reef. In the two-hour series return of Law Of The Land (8.30pm, Nine), the townsfolk of Merringanee are rocked by a death and are divided by businessman Michael Delaney’s (Michael O’Neill) plans for the town.

Thursday: In Home And Away (7pm, Seven), Sarah (Laura Vasquez) has some bad news about her father. Beyond 2000 (7.30pm, Ten) reports that chicken manure may be the fuel of the future. In Getaway (7.30pm, Nine), Jeff Watson cycles through a Cairns rainforest, and Rebecca Harris gives an Aussie guide to surviving Paris.