Sigrid set for murder
The Seven and Nine networks have been in battle over the latest project to come from producer Hal McElroy. Murder Calling, a 26-part series based on Jennifer Rowe‘s Verity Birdwood mystery series, was initially in development between McElroy’s company, Southern Star Xanadu, and the Seven Network. When Seven decided the series should take on a Murder She Wrote style, Southern Star took back the project without Seven’s financial assistance. The series was then pitched to both Nine and Ten, with Nine picking it up. Murder Calling is set to star Sigrid Thornton as private investigator Birdwood. Production on the series is due to start in the second half of the year. 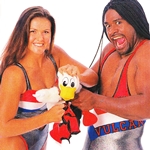 ‘Daryl’s a dead duck!’
Following last week‘s comments from Daryl Somers that “Gladiators is gone”, two of the Gladiators, Vulcan and Delta, have fought back — though with tongue firmly in cheek. “We’ve got the dumb duck and now we’re coming to get you and your program, man,” Vulcan (clutching Hey Hey It’s Saturday‘s Plucka Duck) said in his over-the-top manner. “That’s it! It (Hey Hey) is finished! Leave it to the fit and good looking people. Six-thirty Saturday night is our timeslot. It is time for you to go. Hasta la vista, baby!” Delta responded to Somers’ claims that Gladiators is mostly only popular with children. “I get a lot of fan mail from over 18-year-olds right up to 45-year-old and even some grandmothers,” she told TV Week. “I can only challenge Daryl to come over and watch us film and have a go at a few things. If he thinks this is kids’ stuff, I can guarantee him it’s not.” 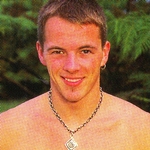 Dieter exposes naked truth
Former Home And Away star Dieter Brummer (pictured) is set to bare all, behind some strategically placed fig leaves, in Seven‘s upcoming special, The World’s Greatest Nude Moments. The show, hosted by Frankie J Holden, is set to uncover various aspects of nude culture — including the nudist colony where the special is being filmed, plus the world’s only nude city (it’s in France) and HG Nelson exploring the merits of nude volleyball and skiing. Brummer’s segment is based on the various activities one should or shouldn’t do while nude. “I can’t remember it all, but it’s things like you shouldn’t do iron ore smelting or fry eggs nude,” he told TV Week. “It’s pretty funny, and basically anything you can do clothed, you can do nude.”

Sunday: In Talk To The Animals (6.30pm, Seven), Jane Holmes visits Australia’s first kitty kindergarten at the Seaforth Veterinary Hospital. This week’s episode of Naked: Stories Of Men (8.30pm, ABC) features Ghost Story, the story of a 14-year-old Chinese boy who is disturbed by recurring dreams after his mother commits suicide. Sunday night movies are The Man Without A Face (repeat, Seven), Forever Young (repeat, Nine) and The Lawnmower Man (repeat, Ten).

Monday: In Neighbours (6.30pm, Ten), Danni (Eliza Szonert) is off to Sydney for three weeks to help launch a fashion label. In Water Rats (7.30pm, Nine), Billy Pope’s (Gary Waddell) girlfriend is found murdered on the eve of giving evidence in an enquiry into police corruption. In comedy series After The Beep (8pm, ABC), Jo (Geneviève Lemon) quits her job after a fight with her boss and arrives home to find her house has been burgled. In Pacific Drive (11.15pm, Nine), Bethany (Melissa Tkautz) keeps her distance from Adam (Mark Constable) and takes an HIV test.

Tuesday: In The Great Outdoors (8pm, Seven), Bridget Adams joins the festivities of the Cannstatter Volkfest in Stuttgart, Germany, and visits the Mercedes Benz Museum. The 68th Academy Awards (8.30pm, Nine) are on a delayed telecast from the Dorothy Chandler Pavilion, Los Angeles, and hosted by Whoopi Goldberg. Films nominated for Best Picture are Apollo 13, Babe, Braveheart, The Postman and Sense And Sensibility.

Wednesday: In Home And Away (7pm, Seven), Dylan (Corey Glaistner) won’t talk about Shane’s (Dieter Brummer) death. In Fire (9.30pm, Seven), the West End firies have to consider mutiny on the fireground when confronted by an officer who appears to be mad.

Thursday: In Neighbours (6.30pm, Ten), Jo (Emma Harrison) worries about her career as an aerobics instructor after she discovers Toadie’s (Ryan Moloney) motivation for joining her classes. Comedians Julia Morris and Jimeoin are among the cast of the Melbourne International Comedy Festival Gala (8.30pm, Seven) from Her Majesty’s Theatre, Melbourne.