When Graham Kennedy announced his resignation from hosting Nine‘s In Melbourne Tonight at the end of 1969, it was of no great surprise. Kennedy, at 35, had been working in radio and then television for almost half of his life. In Melbourne Tonight alone had been running for 12 years, although at this stage Kennedy was down to hosting only two shows out of its five a week. He had decided secretly almost a year earlier it was time to go but was happy to keep everyone guessing for much of the year.

There was heaps of media speculation over his future at Nine into 1970. Kennedy’s manager Harry M Miller was said to have been in discussion with rival network Seven. There were also rumoured negotiations with Reg Ansett, proprietor of ATV0, Melbourne, on behalf of the 0-10 Network, and even reports that Kennedy and Miller were looking to set up their own independent production company.

By November it became official that Kennedy would indeed finish up at Nine, effective 31 December, with his last In Melbourne Tonight to be on 23 December. Meanwhile, Nine had been signing up names to take over Kennedy’s spot as host of IMT. Jimmy Hannan, who had left Nine five years earlier, had returned to the network as one of Kennedy’s successors.

Bert Newton, Stuart Wagstaff, Ugly Dave Gray and former Sydney Tonight host Don Lane were also locked in to host the new-look IMT in 1970, with each host taking on a different night. The final Kennedy-hosted IMT aired on 23 December 1969. The episode was largely in the typical format of the show, with little reference to it being Kennedy’s last.  That was until newsreader Eric Pearce appeared on screen to present Kennedy with a replica of the crown worn by King Henry IV. The replica had reportedly been worn by John Gielgud and Sir Laurence Olivier in Shakespearean films and by Robert Taylor in the movie Knights Of The Round Table. Being crowned with the replica was symbolic of Kennedy’s famed title of “the King of Television”. After a tribute speech given by Pearce, Kennedy responded: “I’ve started to feel as though I’ve just passed away.” Kennedy waves goodbye surrounded by the cast of his last IMT

He then gave a fond farewell to his many viewers: “I wish there was some way I could get through that glass and kiss you all.” 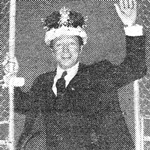 Journalists were discouraged and press photographers were not allowed in at all to witness the final show. TV Times did the best it could by taking pictures of the TV screen as the show went to air for its coverage of the occasion (above). Although the freshly-crowned Kennedy managed to sneak past the “blockade” and give a wave to photographers waiting outside (pictured, right).

In Melbourne Tonight did not fare well in its new format although it did survive long enough to mark its 3000th episode in October 1970. The show was eventually reduced to only two nights a week — those hosted by Stuart Wagstaff and Ugly Dave Gray — before being axed in March 1971.

Permanent link to this article: https://televisionau.com/2019/12/50-years-since-the-last-kennedy-imt.html