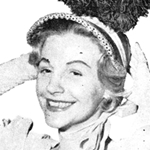 Pardon, Miss Westcott was set in the Rum Rebellion days of the early 1800s and told the story of Elizabeth Westcott, the daughter of an English inn-keeper deported to Sydney for a trivial crime. Playing the lead role was Wendy Blacklock, who had returned to Australia after working in the United Kingdom. 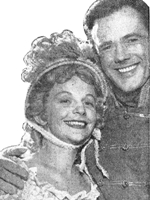 On her way to Sydney, Westcott attracts the romantic interest of army officer Richard Soames (played by stage and television performer Michael Cole).

After serving her sentence, Westcott opens a tavern and becomes a hit on the Sydney social scene, including crashing a party at Government House.

Pardon, Miss Westcott was written by Peter Benjamin and Peter Stannard, co-writers of the Australian stage hit Lola Montez, and performed live to air from the studios of ATN7, Sydney at a cost of £5000. The performance was recorded for delayed broadcast on GTV9, Melbourne, in December 1959. The Melbourne screening of Pardon, Miss Westcott! is among the latest additions to Classic TV Guides:

Permanent link to this article: https://televisionau.com/2019/12/classic-tv-guides-pardon-miss-westcott.html