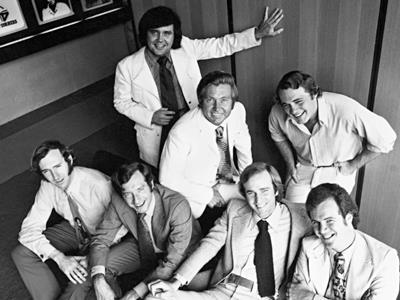 TDT, as it became known, was first hosted by Bill Peach, formerly host of TEN10‘s Telescope program in Sydney. Telescope was loosely based on the UK Tonight show and it was a similar model to be adopted by TDT as a nightly current affairs show that occasionally didn’t take itself too seriously.

ABC had actually launched a predecessor to This Day Tonight in Tasmania in 1966. Lineup was a three-nights-a-week local current affairs program that proved to be hit with Tasmanian viewers.  The success of Lineup inspired ABC executive Ken Watts to put together a national format and go to air five nights a week.

Watts recalled Peach as the host of Telescope and poached him from ABC’s weekly Four Corners. Allan Martin, a New Zealander who had been a director of the British crime series No Hiding Place, was hired as TDT‘s executive producer. As well as having reporters in Sydney there were similar teams established in Melbourne and Canberra.

TDT initially began with a “national” edition based in Sydney with direct links to Melbourne and Canberra. Other states began producing their own similar versions and in some cases avoided the TDT title. The Adelaide and Brisbane shows were initially known as Tonight, while Tasmania kept the Lineup name. Eventually, This Day Tonight became the title across Australia.

ABC has commemorated the 50th anniversary of the debut of This Day Tonight by putting that first episode up on YouTube. At the time, reviews of the first episode were not overly flattering, with TV Times critic Frank Doherty stunned but forgiving at the show’s opening segment: “For some reason that I still find unfathomable it was decided that This Day Tonight should burst upon an audience that had been warned for days and nights beforehand of its coming with a piece of buffoonery that would have been humdrum even by News Review standards. One forgave Bill Peach’s tragic attempt at lightheartedness, putting it down to nervousness and forgave, too, the puerile three fake telegrams putting them down to a try (however unsuccessful) to get some opening laughs.”

Doherty did see, however, that despite the shaky start This Day Tonight showed great promise: “All in all, This Day Tonight can afford to look ahead with promise. Shows like this invariably get away to unimpressive starts if only because they have been ballyhooed so much and tend to be unsure of themselves.”

The TV Times critic’s optimism was well placed. This Day Tonight won a TV Week Logie Award in 1968 for Best New Show, and continued for a marathon eleven-year run. It set the tone for television current affairs to be aggressive in its questioning of political figures, but also to have a lighthearted side — as attempted in its first episode and with various satirical references that followed over the years.

TDT finally came to an end in 1978 after the national program had been converted to a state-based format.

Over the course of its eleven years, TDT featured many names that went on to very successful careers not just at ABC but in the commercial sector. Gerald Stone, Mike Willesee, Caroline Jones, Mike Carlton, Peter Luck, Paul Murphy, George Negus, Iain Finlay, Peter Couchman, Stuart Littlemore, Richard Carleton, Kerry O’Brien and Tim Bowden were among those to come through TDT. Permanent link to this article: https://televisionau.com/2017/04/this-day-tonight-50-years-on.html