Peter Luck, journalist, author, producer and presenter, has passed away at the age of 73.

He died following a long battle with Parkinson’s disease

Luck’s career started in the 1960s, as a reporter for ABC‘s This Day Tonight and later for Four Corners.

In 1979 he co-wrote and hosted the documentary series This Fabulous Century. The series, which was two years in the making and screened over 36 weeks, was billed at the time as the most expensive documentary series ever produced in Australia. Screening on the Seven Network, This Fabulous Century documented the various aspects of Australian life since federation, tapping into the resources of Cinesound, Movietone and the National Film and Sound Archive. It won a TV Week Logie Award in 1980 for Best Documentary Series. 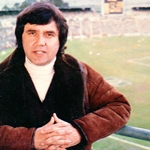 Luck then followed This Fabulous Century with the single documentary Who Are We?, delving into Australia’s multicultural identity. Who Are We? was the first program to go to air on opening night on the network that is now SBS.

Later documentaries included the series The Australians, 50 Fabulous Years and Bicentennial Minutes: A Time To Remember.

Luck was also a frequent presenter on current affairs. He often popped up as a guest host on Hinch At Seven and Today Tonight and also presented the Australian version of Inside Edition for Network Ten. For two years he was executive producer of the Nine Network‘s Sunday.

In the late 1990s he created and hosted Where Are They Now? for the Seven Network and was a columnist for Sydney’s Sun Herald newspaper.

In 2006 he wrote a book, 50 Years Of Australian Television, documenting his own perspective and experiences in the history of television.

ABC managing director Michelle Guthrie has paid tribute to Luck in a statement: “Peter Luck was a trailblazing journalist who became a role model to generations of reporters and was also loved and respected by audiences. He made a huge contribution to the ABC in his early career and remains forever part of the fabric of the national broadcaster. All ABC staff join me in paying our respects to Peter and passing on our deepest sympathies to his family.”

Permanent link to this article: https://televisionau.com/2017/09/obituary-peter-luck.html