The hour is nigh!
After months of speculation it now appears that Nine‘s Jana Wendt is to move to New York to appear on the US version of 60 Minutes. Her contract with Nine expires at the end of the year — and through Nine’s output arrangements with the US it will still have access to Wendt’s US 60 Minutes stories, but without the high salary. Wendt’s husband Brendan Ward is also free to move with no professional ties here except for some post-production work for Seven.

Super Soap Showdown!
The stars of some of Australia’s most popular TV dramas of yesteryear will battle it out in Sale Of The Century‘s Battle Of The TV Classics. Joining Glenn Ridge and Nicky Buckley will be Paul Cronin, Lorraine Bayly, Andrew McFarlane and Susan Hannaford from The Sullivans; Maggie Kirkpatrick, Val Lehman, Fiona Spence and Colette Mann from Prisoner; Cornelia Frances, Chris King, Bartholomew John and Judy McBurney from The Young Doctors; and Jeff Kevin, Johnny Lockwood, Candy Raymond and Elaine Lee (pictured) from Number 96. 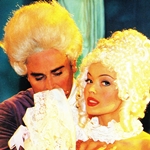 Kimberley’s new drama
Neighbours star Kimberley Davies has landed herself a new series of her own. She will be starring with John Howard in eight-part series of plays called Kimberley’s Playhouse — but the series appears only as a segment in ABC‘s comedy series HG & Roy Tonight. “Kimberley was an absolute professional,” Roy Slaven (John Doyle) told TV Week. “Each role fitted her like a comfy pair of slippers. I think she enjoyed working in another style different from the naturalism of Neighbours — that other show she does. Once casting directors cop an eyeful of this, she could easily become our next Sigrid Thornton.”

Don’s second slam dunk special
Following the ratings success of the recent tribute to The Don Lane Show, the Nine Network is doing it again this week with The Don Lane Show, Too! “There’s interviews that even I’d forgotten I’d done,” Lane told TV Week. But while TV variety is becoming a thing of the past, Lane is set for the next stage in his TV career. He has signed a lucrative deal to host a home shopping show for a pay TV network. “I see this as the next stage of the industry and it’s great to be involved,” he said.

“It’s down to the bare-knuckles stuff now between the Seven Network‘s established Home And Away, and confident challenger, Network Ten‘s Echo Point. Eventually, it will have to be a fight to the death but, in between times, the biggest problem could be trying to pick the difference between them. We’ve had the Echo Point crowd introduced amid some plotline intrigue, while Home And Away has re-introduced some former favourites, albeit one of them as a ghost!”

Program Highlights (Melbourne, June 17-23):
Saturday: In Beyond 2000 (5.30pm, Ten), musician Mike Oldfield talks about the making of his CD ROM. The AFL season has a mid-year break while the league plays State Of Origin — Victoria versus South Australia — in a delayed telecast from the MCG (6pm, Seven).

Monday: In Home And Away (7pm, Seven), a plane is reported to have gone down with Angel (Melissa George), Dylan (Corey Glaister) and Teresa (Diane Craig) on board. Sale Of The Century‘s (7pm, Nine) Battle Of The TV Classics kicks off tonight featuring cast members from The Sullivans.

Tuesday: In Home And Away (7pm, Seven), the plane wreckage is found with one fatality; while Michael (Dennis Coard) goes off in search of two missing people. Don Lane presents a second tribute to his long-running tonight show with The Don Lane Show, Too (8.30pm, Nine). In GP (8.30pm, ABC), Sonia (Zoe Carides) and Martin (Damian Rice) are in conflict over their racial attitudes when the witness an injured footballer’s shabby treatment by his club. Thursday: In Echo Point (7pm, Ten), Frannie (Rebecca Murphy) is hurt to see Dave (Tom Long) has a girlfriend. The series return of Getaway (7.30pm, Nine) features shopping in New York, trekking from Nepal to Mount Everest and a trip of a lifetime on board the Endeavour. In Police Rescue (8.30pm, ABC), thrillseeking BASE jumpers try to enlist Mickey (Gary Sweet) and the Squad as their ground crew.

Friday: In Neighbours (6.30pm, Ten), Marlene (Moya O’Sullivan) continues in her quest to find the gnome snatcher. The AFL season resumes with Friday Night Football (9.30pm, Seven), a delayed telecast of Essendon versus Hawthorn at the MCG.