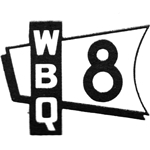 Today marks the 50th anniversary of the launch of what is now the Seven Queensland regional network.

The licence to operate the commercial television service for the Wide Bay region, north of Brisbane, was awarded to Wide Bay-Burnett Television in October 1962. The company’s shareholders included local radio and print media outlets plus theatre owners Birch, Carroll And Coyle.

The Postmaster-General later announced that the new station will be assigned the Channel 8 frequency.

Broadcasting from a tower on Mount Goonaneman, WBQ8 made its first test transmissions on 22 March 1965. A week later the station began daily test transmission from 2.00pm to 6.00pm, Monday to Saturday, before the official launch on Saturday 10 April 1965. 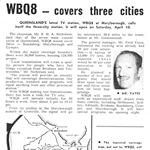 Up until WBQ8’s arrival, viewers in parts of the region — representing a population then of around 128,000 including towns Bundaberg, Maryborough and Gympie — may have been fortunate to receive distant television signals from Brisbane or Toowoomba. WBQ station manager Fred Yates estimated that as much as 30 per cent of households in the region already had access to a television set prior to WBQ’s launch date. (The local ABC station, ABWQ6, was not to launch until October 1965)

Because of the competition from distant channels, WBQ had to establish itself early with a local identity, including an emphasis on covering local news and events. “Local transmission will mean a quality picture for people who have had fringe reception from Brisbane and Toowoomba,” station chairman Mr E H A Nicholson told TV Week at the time of WBQ’s launch. “The station will provide an amenity that will encourage decentralisation. Our production, standard and programs will equal anything from any other provincial station.”

The station premises in the Maryborough suburb of Granville housed three studios plus an outdoor space for special presentations. At the time of its launch, WBQ8 scheduled around 36 hours of programming a week. Within two years this had increased to 45 hours per week including extended hours on Wednesday afternoons.

Because WBQ’s signal covered a wide area, from remote towns Eidsvold and Monto in the west to Bundaberg up north and Gympie in the south, the station often had to resort to chartered air flights to dispatch reporters and cameramen to cover news stories or other events such as agricultural shows from within its coverage area. Some of these towns were as much as 320 kilometres from Maryborough — a prohibitive distance for road travel which didn’t allow time for news film to be brought back to the station for developing in time for the evening news bulletin.

The station attracted industry attention in its first year on air when it was caught in an unlikely dilemma — do they cover Prince Charles’ visit or go searching for the elephant that had escaped from the circus?

The prince, attending studies at Timbertop in Victoria, was spending a few days relaxing at a remote property near Eidsvold, 430 kilometres north of Brisbane, but media were advised that there may be a half-hour opportunity to obtain some casual footage of the visiting royal.

At the same time, the circus was in Eidsvold and their baby elephant Minyak decided to go for a wander. The big story was that the elephant could not be found.

With only one cameraman available the news director had to make a call — catch a glimpse of the prince or follow the hunt for the elephant? They chose the elephant! 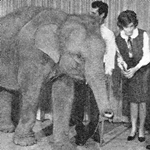 WBQ managed to obtain film of the prince’s visit from QTQ9 Brisbane and once Minyak had been located it was brought in to the WBQ studios to appear on children’s show Teleclub (pictured).

In the late 1970s, WBQ changed its call-sign to SEQ. The station won a TV Week Logie Award in 1982 for The Hawk, a report tracing a family’s fight to preserve a century-old sailing ship. The special report, featured in the station’s This Week program, traced the ship’s history from its construction in New Zealand to the campaign to stir authorities into helping preserve it.

By the 1980s, SEQ had come under the control of Christopher Skase‘s Qintex group, which also owned Brisbane channel TVQ0. The group also acquired MVQ6 Mackay in 1987, just as Skase was relinquishing TVQ0 and gaining control of the Seven Network in Sydney, Melbourne and Brisbane. With the pending aggregation of regional television markets, SEQ8 and MVQ6 re-branded as Sunshine Television Network in 1990 with an affiliation to the Seven Network for program supply. The network, with the new call-sign STQ, expanded its coverage to Toowoomba in the south up to Cairns in the north, from December 1990.

Meanwhile, rival networks WIN and QTV were expanding into Sunshine’s territories as affiliates of the Nine and Ten networks respectively.

Seven Queensland continues to provide local news services to the multiple regions it broadcasts to. The weeknight bulletins, hosted by Rob Brough and Joanne Desmond, are based at studios in Maroochydore on the Sunshine Coast. Permanent link to this article: https://televisionau.com/2015/04/seven-queensland-turns-50.html