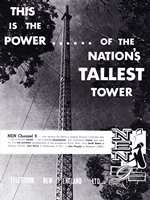 Television New England Ltd obtained the licence to provide a commercial television service to Tamworth and the Upper Namoi region in October 1962.

NEN9 was opened at 6.00pm on Saturday 10 April 1965 in front an invited studio audience of 100, including politicians and senior government and television industry figures.

Opening night on the station started with a 20-minute film, The Television New England Story, tracing the development and construction of the television station and the transmitter. NEN9’s studio was situated adjacent to radio station 2TM and the transmission tower located on Mt Dowe, 115 kilometres from Tamworth.

The first commercial played on NEN9 was for Streets Ice Cream, which sent an ice cream cake from Sydney for a ceremonial cutting on camera.

After compere David Longe introduced NEN’s on-air personalities, including Ellen Lee, Peter Hanrahan, Des King, Trevor Anderson and Brian Anderson, the station crossed to its first programs — Bandstand followed by The Phil Silvers Show, variety with The BP Super Show and then the western drama The Travels Of Jaimie McPheeters.

At the time of its launch NEN9 broadcast nightly from 5.00pm to around 10.00pm. It was reported that advertising spots on the station had been completely booked up weeks in advance before opening night.

The station’s coverage area expanded in 1966 with the launch of relay station NEN1 in Armidale.

The company was also a shareholder in neighbouring TV station ECN8 in Taree/Manning River, before buying the station outright in the early 1970s. NEN9 and ECN8 then presented a uniform program schedule across both markets.

In the mid-1970s, NEN9/ECN8 joined the Great Eastland Television (GET) alliance. GET was a grouping of regional stations for the purposes of being marketed to national advertisers 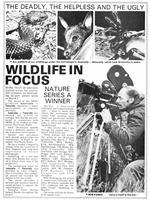 In 1984, NEN9 won a TV Week Logie for Most Outstanding Contribution by Regional Television for its documentary series Australia Naturally. The six-part nature series was devised and written by zoologist Bob Hardie, assisted by zoologist Steve Phillips. Australia Naturally was screened across most of Australia, particularly in regional areas.

The aggregation of regional markets saw NEN9/ECN8 become part of the Prime regional network as an affiliate of the Seven Network. Prime expanded the NEN signal into the Northern Rivers/Lismore and Newcastle markets from December 1991 — while rival networks NBN and NRTV expanded into Prime’s markets as affiliates of the Nine and Ten networks respectively.

In January this year it was reported that Prime7 will vacate the Goonoo Goonoo Road premises it has occupied since 1965. Production of the Tamworth and Taree local news bulletins are to be moved to Prime7’s centralised facility in Canberra, while staff remaining in Tamworth will be transferred to smaller premises.

To celebrate the station’s 50th anniversary, Prime7 will hold a gala function in Tamworth on Thursday 7 May from 6.00pm, to be attended by Prime Media Group Chairman John Hartigan and Chief Executive Officer Ian Audsley, local dignitaries, business and community leaders and staff. The event will
also be attended by a number of former News Presenters and personalities

Permanent link to this article: https://televisionau.com/2015/04/prime7-tamworth-turns-50.html