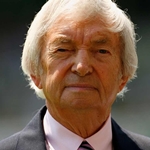 Richie Benaud, champion Australian cricketer and icon of sports broadcasting, has died at the age of 84.

He died peacefully in his sleep at a Sydney hospice, his family advised.

Playing 64 Test matches as an all-rounder between 1952 and 1964, Benaud became a commentator for the BBC in 1960. Joining the Nine Network‘s World Series Cricket coverage in 1977, Benaud would lead Nine’s cricket commentary for over 30 years while continuing to cover the game for the BBC and later Channel 4 in the UK.

A former journalist, in 1980 he told TV Week: “The mixture of a former player and a journalist needn’t necessarily be ideal for commentating. I just do it to the best of my ability. It’s purely a team effort. Everyone has their own style. I’m not critical of that. You talk as little as possible and simply add to the picture on the screen.”

Richie Benaud’s passing has robbed us not only of a national treasure, but a lovely man.

Richie earned the profound and lasting respect of everyone across the world of cricket and beyond – first as an outstanding player and captain, then as an incomparable commentator, and through it all as a wonderful human being.

Richie is a true legend not only to all the people who knew him, but to the many millions who didn’t. Which speaks volumes. He’s been part of the Australian psyche.

Since way back in 1977 Richie has been a much loved member of the Nine family. More than that, he sat at the head of our table. We shall miss him dearly, but we’ll forever treasure his indelible memory and all the marvellous values for which he stood.

Cricket is very much the richer for Richie Benaud’s lifelong engagement. And so are we all. Our deepest sympathies go to Daphne and Richie’s family.

Permanent link to this article: https://televisionau.com/2015/04/obituary-richie-benaud.html