Court in the act!
The Supreme Court on Victoria is set to break tradition and allow cameras into the court for filming of ABC‘s upcoming new series, Janus. The 26-part series stars Chris Haywood, Tracy Mann, Louise Siversen, Felix Nobis, Jeremy Kewley, Leverne McDonnell, Brett Swain, Val Levkowicz and Simon Westaway reprising his Phoenix role of Sen-Sgt Peter Faithful. “There will be no disruption at all to normal court procedure. Filming will occur out of hours, in the evenings, early mornings or at weekends — most probably the latter,” the court’s acting chief executive officer Bruce McLean told TV Week. Because the court precinct is a public area and the property of the State of Victoria, there will be no charge for ABC to access the area for filming. Janus, due to screen later in the year, follows the story of the lawyers, judges, magistrates and police through six months of prosecutions against a well-known criminal family. 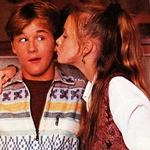 Hey Dad! girl puckers up
Hey Dad teenager Jenny (Angela Keep) has often talked about boys — and now she’s got one. “Jenny’s had boyfriends in the show but I don’t think they’ve ever been shown on TV, just talked about,” Keep told TV Week. “This time, Tracy (Belinda Emmett) knows the signs — knows Jenny’s being secretive, getting home late — and figures she has a boyfriend. Jenny wants Greg (Mark Owen-Taylor) to be uptight so she can rebel a bit. When she tells Tracy that, she tells Greg — and he screams at us when we return home from the movies. Jenny’s really happy. In her group of friends, it’s cool to get grounded!” Jenny’s new boyfriend Richard is played by 17-year-old Ryan Kwanten. 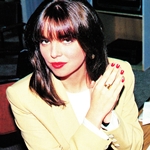 Going for Brooke!
Jane Kennedy was warned against a career in journalism by her former journalist father — and while she did start out as a newsreader on Melbourne radio station Triple M, her knack of breaking into laughter while reading serious news stories soon led to her joining the D Generation, then presenting the breakfast program on the station. Now, Kennedy is going back to her journalistic roots in the name of satire. In ABC‘s new series Frontline, Kennedy plays the part of power-dressing, career-driven reporter Brooke Vandenberg (pictured). “Brooke doesn’t really need to be a great journalist because she knows how to interview people,” Kennedy told TV Week. “She knows how to put her head to the side and nod, she knows how to shove a whole lot of cutaways into a story, and she uses her hands when she walks, which is almost mandatory for any current affairs reporter. She can emulate that classic Jana (Wendt) style very well. But she’s also aware that she’s only got about 10 years left on camera. Female news presenters seem to be ditched, really, after they hit 40.” Although Kennedy plays the fictional current affairs show’s only female reporter, Frontline has a number of female characters — including researcher-production assistant Emma (Alison Whyte) and network publicist Jan Wheelan (Genevieve Mooy). 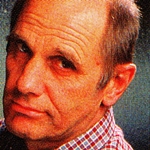 “Maybe the expectations were too high. The word coming out of the ABC was that the pilot of Frontline had been the funniest program anyone had seen in years, and the series itself would be a revelation. With The Late Show now gone from our screens, there was a high sense of anticipation surrounding this new offering from some members of The D Generation team. But — somewhat like the current affairs shows out of which it endeavours to take the mickey — Frontline chugged off to a patchy and slightly disappointing start. Frontline‘s premiere episode wasn’t entirely a let-down, mind you. Far from it, in fact. Everyone who writes about television is talking about the publicist, Jan Wheelan, played by Genevieve Mooy, but the stand-out character for mine is the executive producer, Brian Thompson, as played by that highly competent actor Bruno Lawrence (pictured).”

Tuesday: In Blue Heelers (7.30pm, Seven), Wayne’s (Grant Bowler) hero comes to Mt Thomas, where he finds it hard to live up to expectations. In GP (8.30pm, ABC), an unexpected visit by Martin’s (Damian Rice) father presents him with a dilemma. 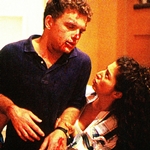 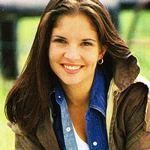