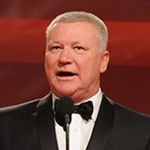 Eddie McGuire made a late appearance, fresh from dropping the c-word on Foxtel‘s Big Week In Footy earlier in the evening.

60 Minutes reporter Tara Brown paid tribute to the late Peter Harvey (pictured), inducted into the TV Week Logie Awards Hall Of Fame in recognition of his lengthy journalism career which included 38 years at Nine. Harvey’s Gold Logie was accepted by his son Adam and daughter Claire.

Peter Overton accepted Nine News‘ Most Outstanding News Coverage award for its coverage of the NSW Bushfires, and ABC’s Foreign Correspondent won Most Outstanding Public Affairs Report for its report on “Prisoner X”.

Ten Eyewitness News presenter and former This Is Your Life host Mike Munro presented a This Is Your Life-type tribute to the Ten Network as it approaches its 50th anniversary later this year. For an industry that can be known to kick a rival when it’s down — and with Ten currently at a ratings low — it was an affectionate piece that recalled some of Ten’s key successes over its history.

There were music performances by Jason Derulo, MKTO, John Newman, Ed Sheeran and the world premiere of Kylie Minogue‘s new single I Was Gonna Cancel. Audio problems dogged much of the music performances, particularly Derulo’s opening sequence, and Minogue copped criticism amid suggestions she mimed her performance. It is something both Minogue — about to appear on screen as a judge on talent show The Voice — and her management have vehemently denied.

Apart from the awards being handed out the biggest prize is undoubtedly the ratings game — and the Logies paled in comparison to previous years. On a night where all networks had their big guns out as ratings returned after a two-week break, the TV Week Logie Awards was 8th highest rating program of the night with 962,000 viewers (OzTAM, 5 cities), while the Red Carpet arrivals averaged 974,000 viewers. Seven’s My Kitchen Rules, though not in direct competition with the Logies, topped the night with 1,912,000. The Australian episode of Modern Family gave Ten a rare glimmer of ratings hope with 1,092,000, while the lead-in preview Modern Family: An Australian Adventure scored 642,000 — a much higher than average result for Ten for the 6.00pm timeslot. The ABC1 telemovie Parer’s War was watched by 522,000.

MOST POPULAR DRAMA SERIES
Home And Away

Data © OzTAM Pty Limited 2014. The Data may not be reproduced, published or communicated (electronically or in hard copy) in whole or in part, without the prior written consent of OzTAM.

Permanent link to this article: https://televisionau.com/2014/04/the-56th-tv-week-logie-awards.html