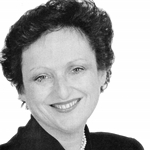 Barbara Callcott, best known to generations of viewers as Mrs Marsh from the Colgate commercials, has died peacefully at her home on Queensland’s Sunshine Coast.

The character of Mrs Marsh, based on an identical American concept, was launched to promote children’s oral health for a series of Colgate toothpaste commercials in the 1970s.  Constantly armed with white chalk and blue ink, to demonstrate the strength of the fluoride on tooth enamel, Mrs Marsh appeared in an almost continuous stream of commercials for over 15 years.

Feedback from the early Mrs Marsh commercials indicated that parents found her a bit too authoritarian, so Callcott worked to give Mrs Marsh a gentler persona as the commercials progressed over the years.

She had much affection for the character but also had to deal with her work being mocked by comedy shows and some unflattering remarks on talkback radio, including from Sydney ‘shock jock’ Ron Casey.  “He said, ‘I wish she’d put her face in a bucket and not come out again’,” she recalled with a laugh in 1990.  But at the time she said her own family were unfazed.  “My son really enjoyed all the jokes about Mrs Marsh which went around the school.  He’d tell me a different one every night,” she said.  “Sure, Mrs Marsh has irritated a lot of people over the years, and yet there are many who seem to be quite fond of her.”

Although the toothpaste commercials featuring Mrs Marsh were phased out from 1990, Callcott continued to campaign for better oral health in children up until last month.

Colgate managing director Chris Pedersen has told media that the company will be setting up an education grant in Callcott’s honour:

“In honour of her legacy, Colgate will be initiating an education grant in her name in recognition of her contribution to oral health education. Colgate staff are saddened by the news and extend their condolences to Barbara’s family.”

Permanent link to this article: https://televisionau.com/2013/05/obituary-barbara-callcott.html