Jenny come lately
The time has come for Sarah Monahan to hand over her Hey Dad! character of Jenny to newcomer Angela Keep.  Monahan has one piece of advice for her successor: “Just enjoy yourself. If anyone bags you out, it’s only because they are jealous.”  Monahan, 16, has decided to step away from the show to become an exchange student.  “I don’t even know where I’m staying yet,” she says.  “All I know is it will be somewhere in Honduras.  It is all a bit scary as I don’t speak any Spanish.”  She told TV Week she is happy about leaving the show.  “They have a really nice girl to replace me, so everything has worked out well,” she said.  “People will like Angela.  She is very nice and she seems to laugh very easily.” 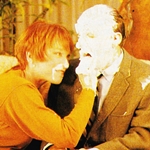 A close shave
When Norman Gunston (Garry McDonald) conducts his celebrity interviews it is usually his subjects that are left shocked — but the tables were turned when Gunston interviewed Hollywood actress Shirley MacLaine for his upcoming Seven Network series.  When Gunston turned up at MacLaine’s house for the interview it was Andrew Peacock, visiting LA on holiday, who answered the door. “Yeah, it was a bit of a shock,” McDonald told TV Week.  “They’re old mates.  He stays there whenever he goes to Los Angeles.”  During the interview with MacLaine, she decided to surprise Gunston and covered his face in shaving foam.  Gunston’s new series of 13 episodes is set to feature celebrity interviews with Lionel Richie, Rod Steiger, Brian Austin Green, Jackie Collins and Anthony La Paglia. 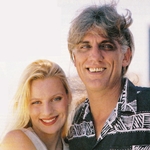 ‘Why is she so pretty, when I’m so ugly?’
Teenager Jo English is the reason that her father, entertainer and All Together Now star Jon English, has decided to break his family’s anonymity.  Jo, one of Jon’s four children, has decided to get into acting.  She has so far had appearances in Home And Away and E Street and had a blink-and-you’ll-miss-it moment in the movie Lorenzo’s Oil.  “She’s a confident person and she’s very photogenic,” proud father Jon told TV Week.  “Why is she so pretty and why am I so ugly?  It may have been a long time ago, but I was once voted Australia’s Sexiest Man Alive.”  But while Jo has plans for an acting career it will have to wait for another year, as both father and daughter have agreed that nothing is to distract her from this year’s HSC studies.

Sandra McLean: The View From Here

“Thankfully, the Seven Network‘s Newlyweds looks like it has a future.  Screening Wednesday night after Hey Dad!, it’s a bright new comedy which shows Ian McFadyen can still write a funny line.  He wrote 11 episodes and ex-partner Maryanne Fahey penned two with actor Ron Challinor.  There are lots of good things about Newlyweds — and one of them is Annie Jones, who’s a surprise as Little Miss Organised, Allie Carter.  Poor Allie falls in love with Peter Roberts (Christopher Gabardi), who is not the ideal son-in-law according to Mrs Irene Carter (Sandy Gore).  Newlyweds is bright, busy and written for a laugh.  It has a contemporary storyline but, thankfully, it makes no attempt to lecture and is happy to go straight to the funny bone.  Ratings and budgets obviously decide, but if I had my way, a second series of Newlyweds would be already on the drawing board.  There is one thing, though — it does make Seven’s other sitcom Hey Dad! look mighty tired.”

Program Highlights (Melbourne, February 7-13):
Sunday:  The 1993 ratings season kicks off today — marked by the return of Business Sunday (8.00am, Nine), Sunday (9.00am, Nine), 60 Minutes (7.30pm, Nine) and Meet The Press (10.55pm, Ten).  Sunday night movies are The Silence Of The Lambs (Seven), The Dead Pool (Nine) and Kindergarten Cop (Ten), up against the Victorian State Opera‘s production of The Pirates Of Penzance on ABC. 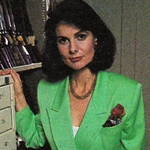 Tuesday:  Ann Sanders (pictured) hosts the new series of Australia’s Most Wanted (8.30pm, Seven).  Australia’s Funniest Home Video Show (7.30pm, Nine) and All Together Now (8.00pm, Nine) are back for the new year.

Wednesday:  In the series return of Hey Dad! (7.30pm, Seven), Jenny (Sarah Monahan) bids farewell as she heads off to boarding school.

Saturday:  The AFL pre-season Foster’s Cup kicks off in Albury with the match between Richmond and Sydney Swans (12.30pm, Seven) and then moves to Waverley Park, Melbourne, for Carlton versus Footscray (8.30pm, Seven).  Hey Hey It’s Saturday (6.30pm, Nine) and Foreign Correspondent (7.30pm, ABC) are both back for another year.