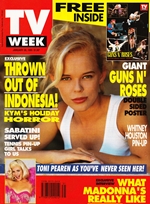 Thrown out of Indonesia!
A romantic trip to Indonesia for former Chances star Jeremy Sims and A Country Practice star Kym Wilson (pictured) took a different turn when it was found that Wilson’s passport was not valid for the minimum six months required to enter the country. “We weren’t too stressed until we had a meeting with an official,” Wilson told TV Week. “As lovely as I found the Indonesian people, who were beautiful, always smiling and friendly, this official wasn’t. He kept saying, ‘No, no! You go home, you go straight home!’. When he stamped by passport to leave the country in five days, I was distraught.” Wilson later was informed from the Australian Embassy that she could obtain a new passport but would have to fly to Singapore to then come back into Indonesia. “Coming back through Immigration, I was polite and chummy and tried to say hello in Indonesian. An officer stamped my new passport and I was fine,” she said. The pair then continued their trip in Indonesia before Wilson had to return home to resume filming for A Country Practice, while Sims went on to travel to Malaysia and Thailand.

‘Wackier and dangerous!’
“It will have more lights, whistles and bells and it will go faster.” That’s how new Tonight Live executive producer David Wilson says the show will be when it begins its fourth season this week. “It will be the wackiest it has ever been,” he said. “We will be doing the unpredictable and we will be more dangerous.” Despite rumours to the contrary, Steve Vizard will continue to host the show four nights a week, with Richard Stubbs hosting on Fridays. Newsreader Jennifer Keyte is now out of the show, and musical director Paul Grabowsky has been replaced by Sam See with the band The Feelers. 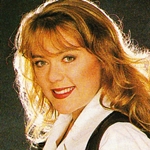 Lisa to land new role
Lisa Hensley (pictured), best known from the award-winning mini-series Brides Of Christ, is the favourite for the lead female role in the Nine Network‘s new 13-part series Law Of The Land. Hensley is tipped to star opposite David Roberts in the series that follows the story of a city lawyer’s transition to a small town magistrate. Also tipped for a role in the series is Debbie Byrne.

“Network Ten, which has taken on the mantle of Australia’s youth-oriented network, will bring in the mini-series 2000 Malibu Road and the new open-ended series Melrose Place. The arrival of Melrose Place makes for more interesting moves. It will turn up in the next few weeks at 7.30pm Fridays, the slot previously occupied by Beverly Hills 90210, the series from which it was spun off. This leaves Beverly Hills 90210 at 7.30pm Sundays, a slot which sets of red alarms for everyone outside the Nine Network. It means Taking On 60 Minutes. It is the slot which many have tried to snatch from 60 Minutes for years now. Few have succeeded for very long. In this attempt Ten is throwing in at the deepest end one of its few successes of last year.” 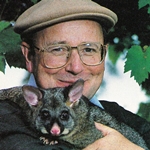 Monday: ABC has live coverage of XXVII Superbowl (10.00am) from the Rose Bowl in Pasadena, California. Seven’s morning news program Eleven AM returns for the new year. Bert Newton‘s mid-morning talk show, formerly known as The Morning Show, is back under the new title Good Morning Australia (9.00am, Ten). Tonight Live (10.25pm, Seven) returns for the new year.

Thursday: Hard Copy (9.30pm, Ten) includes the story of a murder-suicide that stunned the quiet Queensland town of Atherton.

Saturday: In the series return of Beyond 2000 (7.30pm, Seven), Tracey Curro tackles the problem of weightlessness during a space flight, while Bryan Smith goes upside-down in the name of science. Late night sport includes rugby league (Seven’s International, 10.40pm, Nine) from Sydney and rugby union (Five Nations: Wales versus England, 1.00am, Ten) from Cardiff, Wales.