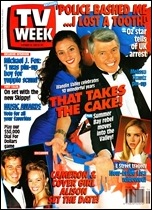 Wandin Valley party
The Seven Network’s A Country Practice turns ten years old next month.  The planned celebration for cast, crew and media is to be held later this month in Sydney – but for three cast members it will also be a farewell party.  Gordon Piper, Syd Heylen and Matt Day are leaving the series, to be followed in the new year by Georgie Parker and John Tarrant.  But one cast member who has been there since day one is Shane Porteous (pictured, with Parker), who recalls a discussion early in the show’s run about its chances of lasting ten years.  “We talked about it, but quickly woke up to ourselves!” he says.  “The most amazing thing about celebrating 10 years is there are kids now in high school who cannot remember A Country Practice not being on TV!  It’s a feather in the cap of the formula.” 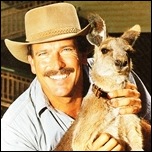 Skipping back!
TV Week has visited the set of The New Adventures Of Skippy, the Nineties remake of the 1960s classic.  The series, being made at the Habitat Wildlife Park on the Gold Coast, stars Andrew Clarke (pictured), Fiona Shannon, Moya O’Sullivan, Kate McNeil, Simon James… and a new Skippy, although unlike the original this one does all her own stunts – no close-ups of fake stick-like paws that do anything from starting lawnmowers to cracking bank safes.  The New Adventures Of Skippy has already been pre-sold to the Netherlands, Spain, Portugal, France and Italy.

Mummy dearest!
Production is underway on the fifth season of the ABC’s Mother And Son – and Ruth Cracknell is having a great time playing geriatric Maggie Beare.  “Never will I think twice about playing Maggie,” she told TV Week.  “Maggie is a character you slip back into pretty quickly.  The thing that makes the show a success is that you get a crowd around you while you’re filming – people who are just as rapt in the show.  They all come – it’s most extraordinary.  That level of interest will always be there as long as the scripts are kept to the standard they are now.”  One of the guest stars to feature in the latest series is former A Country Practice and E Street star Joan Sydney, who joins Maggie for a spot of gambling at the races.  “They have a wonderful day together and get stuck into the champagne,” says Cracknell.

Briefly…
Production is due to start in the new year on a third series of ABC’s Embassy, although this time around there will be a number of cast members missing.  Bryan Marshall, Nina Landis and Janet Andrewartha will not be appearing in the new episodes as producers give the show “a new direction”.

Former Home And Away and Hampton Court star Adam Willits has spoken of being “bashed” by British police when it was suspected he was breaking into the hotel he was staying at while on tour for the Home And Away musical.  “I couldn’t understand why they wanted to arrest me when I had the key in my hand.  They tried to cuff me and I resisted.  The police thought that the only way to get me in cuffs was to give me a few thwacks around the head,” he said.  “I never touched them.  I only tried to resist them putting the handcuffs on me.”  He was later released without being charged. 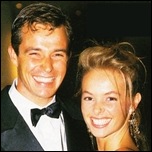 Actor Cameron Daddo and fiancee Alison Brahe (pictured) have set a date for their wedding.  Engaged earlier this year, the pair are set to marry before Christmas.  They are currently living in Melbourne, where Daddo is working on the spin-off series from the Bony telemovie.  Model Brahe is set to start work soon on a new children’s show, Guess What?, to be produced for the Nine Network.

John Laws says…
”Did you notice that the sky hasn’t fallen in at SBS?  Did you notice the network hasn’t lost its credibility?  Did you notice that the SBS range of programs remains as diversified as ever?  I say this because it’s some months now since SBS began screening advertisements and we can all recall the prophets of doom who were predicting that SBS as we know it would be besmirched and changed forever – for the worst – if it accepted advertising.  The predictions, of course, were nonsense.  Advertising has been accepted into the SBS format with absolutely no problems.”

Sunday:  Ten crosses to the Gold Coast for the Uncle Toby’s Ironman Super Series, while Nine crosses to Suzuka for the Japanese Grand Prix.  Sunday night movies are A View To A Kill (Seven), Ghostbusters II (Nine) and Dragnet (Ten).

Monday:  In A Country Practice (Seven), the strange behaviour of Matron Prior’s (Maureen Edwards) son conceals a mystery, and plumbers apprentice Grant Frazer (Rob Carlton) hides a personal problem – until it’s almost too late.  In Col’n Carpenter (Ten), Colin (Kim Gyngell) starts to doubt his own sanity and agrees to see a psychiatrist.

Tuesday:  In Chances (Nine), Alex’s (Jeremy Sims) loyalty and love for Paris (Annie Jones) is tested when her father makes an offer that Alex may not be able to refuse.  In Beyond 2000 (Seven), Maxine Gray reports on a drug which, when administered to addicts, triggers massive, rapid withdrawal that leaves their bodies opiate free.

Wednesday: In Hey Dad! (Seven), it’s council clean up day and Martin (Robert Hughes) rouses the troops to do their bit.