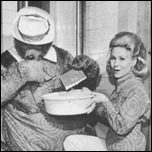 Tedd Dunn, the man who put life into the TV character Fredd Bear, has died from cancer.

Dunn, 66, was a fashion designer and was wardrobe manager at the new Melbourne channel ATV0 when the station was looking for ideas for a children’s show. He created the costume for Fredd Bear (the two Ds taken from his own name) and subsequently ended up wearing it, as he made the costume so big that, with his towering frame, he was the only one who could wear it.

Dunn, as the non-speaking Fredd Bear, made his on-camera debut on ATV0 in August 1964 on The Children’s Show, which became The Magic Circle Club, hosted by Nancy Cato.

Portraying Fredd Bear, in a suit made up of fur and padding and not allowing much circulation, almost threatened Dunn’s own life when he appeared in the Melbourne Moomba procession in 1965. Normally the suit can only be worn for about 45 minutes, but delays on the day caused Dunn to be in costume for over two hours and he was close to blacking out. Always the professional, Dunn refused to remove the headpiece from the suit to allow him to breathe and therefore ruin the illusion of Fredd Bear from his young fans. He managed to stay conscious long enough to hand over a bunch of flowers to Prince Phillip at the end of the procession. The incident led to several months’ recovery for Dunn, and upon returning to the channel he re-designed the outfit to reduce heat and improve circulation.

After The Magic Circle Club was axed, many of those involved moved over to ABC to create Adventure Island, but Dunn stayed at ATV0 where the Fredd Bear character lived on in Fredd Bear’s Breakfast-A-Go-Go from 1969 to 1971. The two-hour program, starring Fredd Bear with Judy Banks (pictured, with Fredd), Mike McCarthy and Colin McEwan, featured a mix of cartoons and studio segments and became a ratings hit in a timeslot not normally known for high ratings.

Later going on to be a producer at ATV0, in 1975 Dunn won a TV Week Logie award for Most Outstanding Creative Effort after his work on special presentations Gown Of The Year and The Sound Of Christmas as well as Frankie Howerd specials.

Permanent link to this article: https://televisionau.com/2010/06/tedd-dunn.html