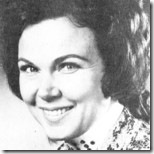 Tanya Halesworth, one of ABC’s first female television presenters, died earlier this month at the age of 73.

Born in Brisbane in 1935, Halesworth moved with her family to Sydney and after finishing school became involved in small theatre companies and appeared in early TV commercials.

In 1958, the 23-year-old successfully beat 200 other applicants for an announcing and presenting role at ABC’s Sydney station ABN2.  Later, in amongst studies and theatre performences, she also appeared as a presenter on Six O’Clock Rock.  In 1961, she won a TV Week Logie award for Most Popular Female Personality in NSW.

Halesworth moved to the Seven Network in 1962, and there met her future husband, announcer and interviewer John Bailey.  Although Halesworth had already been married, and divorced, and had declared that “entirely against man’s instincts to be tied down to one woman”, she later married Bailey after returning from working in the United Kingdom in the mid-1960s.  The pair worked at TEN10 Sydney before moving to GTV9 in Melbourne.

In June 1973, Halesworth launched the Nine Network’s daytime current affairs program No Man’s Land, a ground-breaking effort given the program had an all-female line-up, including reporters Mickie de Stoop and Susan Peacock, and was determined to “liberate the women from the kitchen sinks and laundries for 30 minutes every day to keep up with the news.”  The program won a TV Week Logie in 1975 for Outstanding Contribution to Daytime TV.

Halesworth then returned to ABC in the 1980s to host the arts program Sunday Spectrum, then moved to the Ten Network‘s Good Morning Australia, before leaving television.  She then went on to a career in public relations and later in psychology.

Halesworth returned to Queensland in the late 1990s following the death of Bailey, and continued working until she was diagnosed with cancer earlier this year.

Tanya Halesworth is survived by her sons John, Michael and Keiran and their families, and six grandchildren.