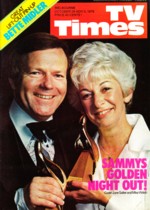 Sammys Golden Night It was a Who’s Who of Australian Showbusiness when 800 stars, producers and writers gathered at Sydney’s Seymour Centre on 11 October for the third annual Sammy Awards.  The awards, held in partnership between TV Times, the Variety Club of Australia charity and the Seven Network, honour the Australian film and television …