It’s time to crack open the Bailey’s and put on the Footy Franks, Kath And Kim turns 20 today.

The initial series of eight episodes debuted on ABC on 16 May 2002, though the characters and premise of the show was born some years earlier as a series of sketches in Big Girl’s Blouse and Something Stupid. The first series revolved around the engagement and wedding plans for divorcee Kath and her ‘hunk-a-spunk’ boyfriend Kel, while recently-married Kim returns to her mother’s house following a break up with husband Brett. The second series follows the rekindling of Kim and Brett’s relationship and the pending arrival of their baby daughter, Epponnee Rae.

A third series ran on ABC in 2004, followed by a telemovie, Da Kath And Kim Code, in 2005, before the announcement that the fourth series would be made by the Seven Network in 2007. 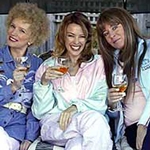 Kath And Kim went on to win three TV Week Logies and four AFI Awards before producing a movie spin-off, Kath And Kimderella, and the concept being franchised to NBC to produce an American version.

But while Kath And Kim continues to live on with free-to-air and streaming re-runs, the “effluent” waterfront house in Patterson Lakes that was the central point of the series has only recently been demolished.

Permanent link to this article: https://televisionau.com/2022/05/kath-and-kim-turns-20.html