Legendary cricketer Shane Warne has died of a suspected heart attack at the age of 52.

ABC reports that he was holidaying with four people in a luxury villa on Koh Samui. He was found unresponsive in his villa and despite the best efforts of medical staff, could not be revived

In a career spanning over two decades, Warne set a world record of 708 Test wickets and and has taken more Ashes wickets than any other Australian. He was inducted into the ICC Cricket Hall of Fame in 2013. 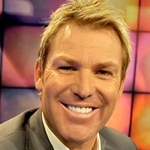 In 2010 he hosted his own talk show, Warnie, for the Nine Network. He was a cricket commentator for Nine up until 2018, then for Sky Sports and Fox Cricket.

He was a contestant in the second series of Ten‘s I’m A Celebrity… Get Me Out Of Here! and made cameo appearances in Kath And Kim (as “Shane Warne Impersonator”, Wayne) and Neighbours. He also made guest appearances on The Real Housewives Of Melbourne, Who Wants To Be A Millionaire?, The Footy Show and Cricket 360.

His life was recently profiled in the Amazon Prime documentary, Shane.

Permanent link to this article: https://televisionau.com/2022/03/obituary-shane-warne.html