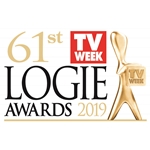 The awards will again be held at The Star Gold Coast and for the 24th consecutive year will be broadcast on the Nine Network.

TV Week has this year announced the return of two popular vote categories — Most Popular Panel Or Current Affairs Program and Most Outstanding Entertainment Program — and will introduce a new award, Most Outstanding Reality Program.

Public voting for this year’s Logies will be open from Monday 4 March to Sunday 31 March at the Logie Awards website: http://www.tvweeklogieawards.com.au

Nominees will then be announced on 26 May.

Permanent link to this article: https://televisionau.com/2019/02/tv-week-sets-june-date-for-logies.html