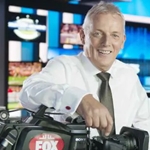 Fox Footy commentator Sandy Roberts has announced his retirement after 46 years in television. Roberts began his TV career at BCV8 in Bendigo. He then joined Adelaide station ADS7 in 1973 as announcer and presenter, including co-hosting the Logie-winning Adelaide version of Penthouse Club with Bob Francis and Anne Wills and was also a stand-in host …