So long, Summer Bay…
Melissa George (pictured) was all smiles… and tears… as she bid farewell to Home And Away after three years as former street kid Angel. “I’ve been fortunate enough to see a little girl grow into a lady,” said producer Russell Webb, referring to George joining the cast as a 16-year-old, before handing her a bunch of flowers and a farewell gift from the cast and crew — a gold ring inlaid with precious gems. “Thank you for being so beautiful, you’ve been a great family,” she responded. George will soon be off to the UK to discuss plans for a department store to stock her nightwear label, An Angel At My Bedside. George’s final on screen appearance in Home And Away, scheduled for late August, will coincide with the show’s 2000th episode.

GP’s party turns into a wake
Past and present cast members of GP had gathered for a celebration of the taping of the show’s 300th episode — unaware that only hours later would come the news that ABC would not be renewing the series into 1997. The shock decision came after a meeting between ABC’s head of drama, Andy Lloyd James, and head of television, Penny Chapman, where it was decided to cancel GP to make way for other projects. “It is the ABC’s philosophy to continue to explore new areas of drama and to open up new Australian visions for our audience,” Lloyd James said. “In the coming year we have some very exciting new series going into production, both in Sydney and Melbourne, and for that reason we will be unable to renew GP after the end of the year.” GP, which first aired in March 1989, will end as ABC’s second-longest running drama series behind Bellbird, which ran for ten years until 1977. 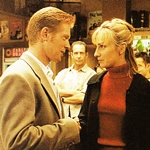 Blue Heelers’ X-Files Secret
Geoff Paine, whose past credits have included Neighbours, A Country Practice, The Flying Doctors, Halifax fp and The Comedy Company, is now joining Blue Heelers in a guest role. He comes into Mount Thomas as criminology professor Roman Kellerman, who has an affair with Maggie Doyle (Lisa McCune). But PJ (Martin Sacks) uncovers some secrets about Maggie’s new man. “Roman is not what he seems, and it’s not smooth sailing,” Paine (pictured with McCune) told TV Week. “Something quite unexpected happens between Maggie and Roman. It’s quite an explosive ending. The last episode you see Roman in is an extraordinary episode, quite supernatural in many ways… very much like The X Files.” 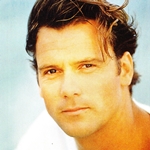 Erik’s legendary journey
Pacific Drive star Erik Thomson (pictured) is enjoying success on both sides of the Tasman at the moment. The Scottish-born, former New Zealand actor moved to Australia when he scored the role of Brett Barrett in Pacific Drive, but has since scored a role in the US series Hercules: The Legendary Journeys — which is being filmed in New Zealand. “Fortunately, they have managed my work on Pacific Drive so that I can go back to New Zealand to work on Hercules any time that I am needed,” Thomson told TV Week. Hercules: The Legendary Journeys airs in Australia on Network Ten.

Program Highlights (Melbourne, July 6-12):
Saturday: Beyond 2000 (3.30pm, Ten) reports on a giant x-ray machine that is helping to fight the war against drug smuggling; and the unseen dangers from volcanic ash that is causing planes to crash. Wimbledon (10.40pm, Nine) features the Women’s Singles Final and Men’s Doubles Final.

Monday: In Neighbours (6.30pm, Ten), Lou (Tom Oliver) and Cheryl (Caroline Gillmer) can’t talk without arguing; and Karl (Alan Fletcher) continues his quest to find his real father. In Home And Away (7pm, Seven), Shannon (Isla Fisher) and Alex (Nick Freedman) get back together. In the series return of Pacific Drive (11.35pm, Nine), Flood (Brian Vriends) steps up his insidious stalking of Laura (Simone Buchanan).

Tuesday: Elizabeth Hayes hosts a documentary, A Time To Live (8.30pm, Nine), following the stories of four people faced with the knowledge they have a terminal illness and will end their lives in Sydney’s Sacred Heart Hospice. In Blue Heelers (8.30pm, Seven), PJ (Martin Sacks) and Maggie (Lisa McCune) must examine the events of the past to solve an allegation of childhood abuse. Patrick Lindsay hosts the one-hour special, Alternatives (9.30pm, Nine).

Thursday: In Getaway (7.30pm, Nine), Rebecca Harris goes kayaking on Sydney Harbour; and later, cricketer David Boon takes her on a tour of his home town, Launceston. In Mercury (8.30pm, ABC), Gibbo (David Roberts) is given a story that threatens the Leader of the Opposition. The final episode of internet series HTTP:// (9.20pm, ABC).