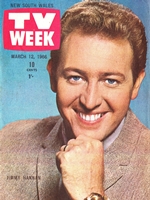 It is not often that competing TV stations will let their guard down and share some goodwill — but it does happen.

So was the case in 1966 and the Royal Children’s Hospital Good Friday Appeal in Melbourne.

The all-day telethon, the culmination of a year’s events of fund-raising for the renowned hospital, was presented by HSV7 with its sister radio station 3DB hosting its own all-day appeal broadcast.

Hannan (pictured above), who had just recently launched his big-budget variety show, Jimmy, on 0 after jumping ship from Nine, joined the proceedings during the day and performed a song on camera. The performance triggered a response from a keen viewer, a Mrs Jackson of Kew, to promise to donate $100 if he sang again. Mrs Jackson followed this with another $100 offer for another song… and another. All up, Mrs Jackson donated $300 to the appeal. Not an insignificant sum in 1966 — as it converts to roughly $4000 in today’s money! 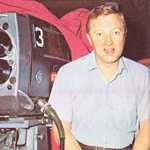 Kennedy (pictured), who had to gain permission from GTV9 to take part, joined the appeal desk in the evening and in typical Kennedy style took a few comic shots at the channel (“they get a good picture here considering the age of the equipment”) and at his former boss Norm Spencer. Spencer had hired the young Kennedy to host In Melbourne Tonight at GTV9 in 1957 but had since moved to Seven.

This year’s appeal, to take place once again at the Melbourne Convention and Exhibition Centre, hopes to break last year’s record total of $17,109,063.22. Permanent link to this article: https://televisionau.com/2016/03/rival-stars-align-for-good-friday.html