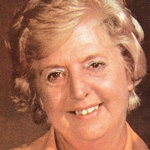 Born in Adelaide, Ramsey appeared in a number of early TV productions including Consider Your Verdict, Adventures Of The Seaspray, The Battlers, Riptide and Homicide. She also appeared in the sketch comedy series The Mavis Bramston Show.

But it was her portrayal of tea lady Mrs Hopkins (or “Mrs H”) in the long-running series The Box that was to be her most prominent role. She played the character for the show’s entire four-year run as well as in the movie spin-off.

Later television credits included The Sullivans, The Truckies, A Town Like Alice, Carson’s Law, The Harp In The South and its sequel Poor Man’s Orange, A Country Practice, E Street, GP, Blue Heelers, Above The Law, All Saints, Always Greener and Rake.

Her appearance in the ABC series Grass Roots led to her winning an AFI Award for Best Performance by an Actress in a Guest Role in a Television Drama Series.

Permanent link to this article: https://televisionau.com/2016/01/obituary-lois-ramsey.html