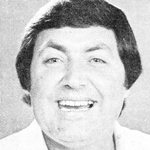 “Have we got a year for you!” — shouted the Nine Network‘s 1976 season launch. Nine’s campaign was fronted by Bob Maumill, a Perth identity who was part of TV’s new breed of “ocker” entertainers, and who was also to host a tonight show for the network.

Maumill (pictured) was not to have a long TV career but continued in radio, back in Perth, where he can now be heard on Sunday mornings on talkback station 6PR.

On the evening of 25 January 1976, Bert Newton hosted a half-hour special, 1976: Have We Got A Year For You!, previewing some of the new and returning shows for Nine over the coming months. The night of Nine’s new season launch features among the latest batch of additions to Classic TV Guides:

Permanent link to this article: https://televisionau.com/2016/01/have-we-got-tv-guides-for-you.html