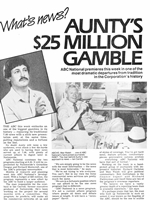 It was a brave — or, in hindsight, perhaps foolish — ABC that decided 30 years ago to cut through decades of tradition in order to ‘refresh’ its news portfolio.

Swept away in the reshuffle was the traditional 7.00pm ABC News and the Majestic Fanfare that went with it (and is still used today on ABC radio), the mid-evening current affairs program Nationwide, the Sunday night Weekend Magazine (a program that dated back to the 1950s) and the 6.55pm regional news bulletins.

The man in charge of the revamp was Ian Carroll, former executive producer of Nationwide who ironically had now led the charge to ditch it.

“We needed to do something with the news,” he told TV Week at the time. “We became boring and our technology was behind. It was inevitable that the news and the audience were going to decline. Every program on the ABC suffered because the news wasn’t up to scratch. And despite the deserved reputation of Nationwide, it had a lot of faults and I found those faults very hard to rectify.”

After months of planning, starting Monday 4 March 1985, the new venture that was to take ABC’s news into the future — The National — was launched with a budget of $25 million.

The National was a glossy, one-hour program combining news and current affairs. It was scheduled at 6.30pm weeknights, in itself an odd timeslot as the commercial networks were (mostly) programming their news and current affairs commitments in the hour between 6.00pm and 7.00pm. Any chance of trying to appeal to non-traditional ABC viewers would likely have failed from the timeslot alone, but it was hoped that by offering a quality alternative that viewers would come across.

“We’re not going to win everyone. You can’t. But in my view the three commercial news services are pretty much the same,” Carroll said. “We are in a fortunate position where we can afford to be the one news program that is different. We believe we have a vastly greater depth of a reporting team than is available elsewhere.” 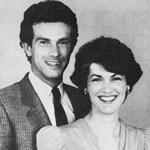 The National also took the risky move of abandoning state-based news coverage, with New South Wales, Victoria, the ACT and Northern Territory all receiving the same program from Sydney (fronted by Richard Morecroft and Geraldine Doogue, pictured) with only a token 10-minute ‘window’ at the end of the program to allow Sydney, Melbourne, Canberra and Darwin to cover their own local news.

Queensland, South Australia, Tasmania and Western Australia presented their own editions of The National but still derived much of their content from the Sydney-based program which included political analysis from Richard Carleton and Max Walsh, finance news with Robert Gottliebsen and reports from foreign correspondents Richard Palfreyman and Geoff Sims.

And in producing a one-hour news bulletin, The National embarked on breaking the golden rule of the ABC — no program breaks. “We’re even putting in breaks in the news,” Carroll said. “I suppose they will be the closest thing the ABC will ever come to commercial breaks. We’ll be promoting other programs on the station and some of our sister programs on radio.”

The National was not well received, although in its 1985 Annual Report, the ABC remarked that news audiences had lifted in all states except Victoria. But by the end of the year, after copping criticism from inside and out of the ABC — including claims the bulletin was more focused on lighter content than serious news — management had to pull the pin on The National.

The 7.00pm state-based bulletins were reinstated from 9 December. A new current affairs program, The 7.30 Report, was to be launched in each state from January 1986.

In its 1986 Annual Report, ABC acknowledged that viewers didn’t adapt to The National, in particular to the timeslot:

“Research in mid-year showed that the change in time-slot away from the ABC’s traditional placing at 7.00pm was a fundamental problem. Many among the ABC’s regular audience were not prepared to change the habits of a lifetime; others found the new timeslot physically inconvenient because of the competing demands of business or family life. The large numbers of viewers who do watch news at 6.30pm or earlier remained unpersuaded by the merits of a change.”

Although Richard Morecroft would continue to front ABC News in Sydney until 2001, Geraldine Doogue resigned from ABC after the end of The National. She later moved into radio (2UE) and read the news at TEN10 before returning to the ABC in 1990. She is now host of ABC’s long-running religious affairs series Compass.

Despite the failure of The National, Ian Carroll went on to many successful ventures at ABC — working on programs including Lateline, Four Corners and The 7.30 Report and was later chief executive of the ABC’s Asia-Pacific Australia Network. He also led ABC’s innovation portfolio, overseeing mobile and online applications as well as ABC iView and two digital channels. Later married to Doogue, he passed away from cancer in 2011.