Actor Terry Gill, star of many Australian television dramas, has died at the age of 75 after being diagnosed with lung cancer.

English-born Gill made his first appearances on Australian TV in the late 1960s in dramas Hunter and Bellbird. During the Seventies he appeared in children’s series Alpha Scorpio and in cop dramas The Long Arm, Matlock Police, Homicide, Division 4, Ryan, Solo One and Bluey. He also featured in historical dramas Power Without Glory, Against The Wind, Cash And Company and The Last Outlaw.

Credits during the Eighties included Come Midnight Monday, Prisoner, Sons And Daughters, Special Squad and The Henderson Kids. He played the role of Sgt Jack Carruthers in the mini-series The Flying Doctors and its long-running spin-off series.

Later roles included appearances in Ratbag Hero, Boys From The Bush, GP, Snowy, Wedlocked, Neighbours, Stingers, Something In The Air, Blue Heelers and Bed Of Roses. 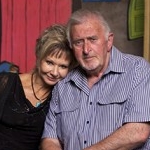 Gill and his wife Carole Ann (pictured) also worked together, running the Tivoli Theatre and performing theatre restaurant revues and children’s pantomimes for many years, both locally and on tour. Their theatre work was covered in the documentary Curtain Call.

Gill also played the role of Santa Claus at the traditional Carols By Candlelight. Carole Ann said his appearance at Carols last year was special because he knew then he was ill. “He was a sick man but we had a wonderful night. He went on stage with the cast and we didn’t get home until 1am. He loved Carols and did it for 27 years, it was one of the highlights of his whole life. I thank Channel Nine and Carols for that,” she told The Age.