ABC has released its Annual Report for the financial year 2013-14, detailing the broadcaster’s activities and financial statistics for the year.

The 250-page report begins with a snapshot of statistics relating to the ABC’s content and audience reach. For instance:

The report indicates that ABC overall (not just television) employs a full-time equivalent of 4679 people (up from 4664 the previous year) and that 51.2% of the workforce is female. The ABC was also recognised as Australia’s most attractive employer at the annual Randstad awards, which measures employer attractiveness.

The Corporation received $868.7 million in revenue from the Government, with the report indicating this as a 24% decrease in real terms compared to the 1986-87 financial year — with the budget allocation to be chopped by another $120 million over the next four years.

The ABC also reported its environmental credentials — including that 95% of paper purchased included recycled material; 876 kL of rainwater was collected at ABC sites; Greenhouse Gas Emissions decreased by 2.8%; and 45.6% of total waste disposed was recycled. 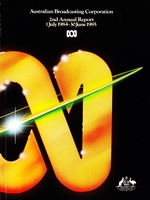 But what was ABC doing, as reported in its Annual Report, almost 30 years ago? The reporting back then wasn’t quite as detailed as happens now (certainly no mention of environmental impacts!) but provides a broad reference to an earlier era of our national broadcaster.

Back then ABC had a single television network, broadcasting for around 94 hours a week from 290 transmitters across the country, including 13 transmitter sites opened during the 12 month period. 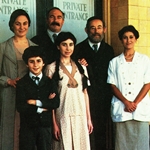 ABC’s single channel that year produced 51 hours of drama programming — up 3.5 hours from the previous year. This included nine telemovies plus series Flight Into Hell, Dancing Daze, One Summer Again, Palace Of Dreams (pictured), Golden Pennies and The Fast Lane.

Entertainment programs included a second series of comedy Mother And Son and Melbourne-based sketch comedies The Gillies Report and Australia You’re Standing In It. There was also production of a pilot for a comedy series, The D Generation, and ABC’s Adelaide station ABS2 was preparing for a new 10-week series, News Free Zone. 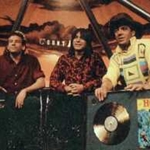 Science program Quantum had replaced technology series Towards 2000, which had made the move to commercial television as Beyond 2000, and The Investigators debuted.

Children’s content was on the increase with the addition of Saturday and Sunday morning programming, and the broadcaster formed a Youth Advisory Council — comprised of viewers age 14 to 17 to preview or recommend children’s programming.

Rural based programs such as Countrywide, A Big Country and state-based programs like Queensland’s Farmline were being well received by regional audiences but there was a recognised need to expand the scope of ABC’s weather reporting to rural areas.

The launch of The National had also led to the cancellation of Weekend Magazine, the Sunday night magazine program that had supplemented the 7.00pm news bulletin. Weekend Magazine had dated back to the late 1950s, making it at the time one of ABC’s longest-running programs.

Current affairs flagship Four Corners had been extended to 50 minutes and shifted to Monday nights, and there were plans for a new mid-evening news program, The Carleton-Walsh Report, to air three nights a week. 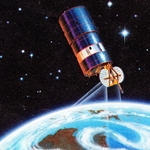 The ABC had also completed the changeover to electronic news-gathering technology — acknowledging that this was well after the commercial sector had done the same — and was well on the way towards the transition to using the Aussat domestic satellite, with ABC television and radio services to be relayed via satellite from November 1985.

ABC’s staff numbers were a lot higher in 1984-85 — with a total workforce (including radio, television, orchestras, news, administration, engineering and Radio Australia) peaking at 6960 nationally, up 159 from the previous year, but with a commitment to reduce staffing levels by 5% over the next three years, to be achieved largely as a result of upgrading technology.

It was also a year of some industrial unrest — with the most significant industrial disputes leading to the loss of TV news bulletins in Melbourne from 13 to 27 July 1984 and no radio and TV announcing duties carried out between 20 and 25 July. ABC Television in New South Wales was interrupted with afternoon programming (between 12.30pm and 5.30pm) cancelled on 11 June 1985, and ABC Radio and Television in Victoria was off-air on 13 June 1985.