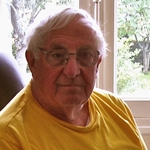 Terence Gallacher, one of the pioneers of production in Melbourne television, has died at the age of 85. Educated in London, Gallacher began his career as an office boy at British Movietone News in 1945. He worked his way up to the position of Foreign Editor and had been involved in preparing news film for BBC‘s early …

END_OF_DOCUMENT_TOKEN_TO_BE_REPLACED

Permanent link to this article: https://televisionau.com/2014/10/obituary-terence-gallacher.html