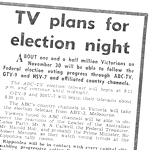 Tonight viewers across Australia will be treated to possibly the largest television coverage of a federal election ever — with saturation coverage across ABC1 and ABC News 24, Seven and 7TWO, Nine, Ten, SBS One and Sky News Australia starting hours before the polls had even closed.

Technology plays a large part in any television coverage of the election, with statistics flooding through as votes are counted, live crosses across the country and with the addition of social media commentary making a greater presence — and fifty years ago another technological advance was making its debut on an election night.

The coaxial cable, linking Sydney and Melbourne via Canberra, had been launched in 1962 to provide carriage of telephony and television communication between Australia’s two largest cities.

In 1963 the Frank Packer-owned stations TCN9 Sydney and GTV9 Melbourne entered into a two-year full-time lease of coaxial cable capacity — estimated to cost £100,000 a year — to enable the instant transmission of program material and news coverage between the two cities.

The link between the two stations was formally launched on Sunday 1 December 1963 but came into use the night before — Saturday 30 November — as the Nine stations covered the day’s federal election from 8.30pm.

As well as employing the link between Sydney and Melbourne, Nine also had access to a £70,000 computer, developed by the Royal Melbourne Institute Of Technology and one of only two such computers in Australia, to be used to calculate statistics and trends and hopefully provide an early prediction of the poll result. 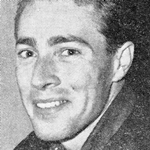 Heading Nine’s Sydney-Melbourne coverage were Brian Henderson (TCN9) and Eric Pearce (GTV9) with Bob Walters, Mike Ramsden and a team of reporters based at the official tally room in Canberra headed by Kevin Sanders (pictured). The coverage also included reporters from The Age newspaper in Melbourne and The Daily Telegraph in Sydney.

The National Television Network (Nine) coverage of the election was also to be relayed to regional stations NBN3 Newcastle, WIN4 Wollongong and GLV10 Gippsland.

In Melbourne, rival channels ABV2 and HSV7 had locally based election coverage — starting at 9.15pm and 8pm respectively — with the promise of “direct contact” with Canberra and other interstate capital cities for up-to-date statistics.

All three channels were planned to wind up their election night coverage at midnight. Permanent link to this article: https://televisionau.com/2013/09/federal-election-started-tv-revolution.html