The Full Frontal assault on Kym
Two years ago Kym Wilson (pictured, near right) was living a life of relative obscurity.  But since rising to fame in Brides Of Christ and A Country Practice, and getting engaged to actor Jeremy Sims, privacy is now something of a rarity for her.  But although she copes with the loss of privacy that comes in such a public career, some things are still off limits — despite the caricature portrayed in a recent Full Frontal parody, with Jane Turner (pictured, far right) depicting “Kym Wilson’s Tragic Brush With Privacy”.  “Some people came up the next day and asked if it bothered me,” she told TV Week.  “But I was laughing my head off.  I truly didn’t find it offensive at all.”  Turner was pleased that Wilson took it in good humour.  “I thought it was even more hilarious that she came down from Sydney (for the TV Week photo shoot) to do some more publicity!  That’s the good thing about Kym — she’s able to send herself up,” Turner said. 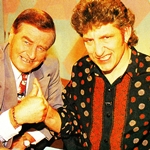 Funny money!
Sixteen comedians will have their knowledge tested in the upcoming Sale Of The Century comedy special. Featuring in the six-episode competition will be performers including Andrew Denton, Anthony Ackroyd, Peter Moon, Jimeoin, Jane Turner, Marg Downey, Russell Gilbert, Jane Kennedy, Ernie Sigley, Denise Drysdale, Trevor Marmalade, Richard Stubbs, Tania Lacy and Canadian comedian Marty Putz. For Turner it will be a return to the Sale set, as she was a contestant on the show back in 1984, to a less than successful finish. “I made an absolute geek of myself,” she said. For Richard Stubbs (pictured with Ernie Sigley) appearing as a contestant is almost a career highlight. “I’ve been a celebrity face on the board, and I thought that was the pinnacle.  But this is really big!,” he said. And The Late Show‘s Jane Kennedy is finally living her dream of being a quiz show contestant.  “My aim was always to be a contestant on That’s Academic. But the show was cancelled before I had the chance.  I’ve always been obsessed with Sale Of The Century,” she said. 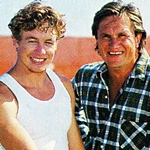 Baby talk
Former E Street star Simon Denny has been gearing up for his biggest role — parenthood — with his partner Rebecca Rigg due to give birth in a few months. But the actor has found that there is such a thing as too much research. “It seems the more you read up on the subject, the more discrepancies you find between writers,” he said. In the meantime, he’s about to return to screens with a guest appearance on A Country Practice. Denny plays the part of apprentice mechanic Stewart Waterman, a young man desperately in need of affection from his emotionally-hardened father, played by Frankie J Holden. The ACP role could be an ongoing possibility but Denny is non-committal.  “ACP has been a great experience, but it would depend on what is being negotiated and, of course, of the timing,” he said.

“The name Diane English on the credits of a sitcom is enough to inspire supreme confidence in any American programmer these days.  Ms English is given most of the credit for the creation of that phenomenon in American TV ratings, Murphy Brown. So when she and her partner Josh Shukovsky came up with a new sitcom called Love And War, it was eagerly awaited by network and viewers alike. Unfortunately, the experience hasn’t been quite as enjoyable as Murphy, and Love And War now appears to be in limbo while English, Shukovsky and CBS decide what to do, particularly where their female lead is concerned. Rumours are rife that Susan Dey has either jumped or been pushed from her role as Wallis “Wally” Porter.” 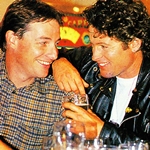 Tuesday:  In the two-hour series final of Law Of The Land (8.30pm, Nine), Peter (David Roberts) steps up to the pressure to finally solve the Jardine mystery. When his car is blown up destroying new evidence linking Jean (Debbie Byrne) to Greg’s death, another suspect surfaces. In GP (8.30pm, ABC), Sam (Peter Phelps, pictured far right), an old friend of Steve’s (Michael O’Neill, near right) is raped by a mate on the eve of his wedding. Documentary series Labor In Power (9.30pm, ABC) traces the rise of the Australian economy during the 1980s, leading to the stockmarket crash of 1987 and ‘the recession we had to have’.

Wednesday:  The Third of the Rugby League Test Series — Australia versus New Zealand — is broadcast live from Brisbane (8.30pm, Seven).

Thursday:  Day One of The Ashes Third Test — England versus Australia — is broadcast live from Nottingham (8.30pm, Nine), followed by live coverage of tennis from Wimbledon (10.35pm) before resuming for the remainder of play (4am). Similar programming follows on the next two nights. 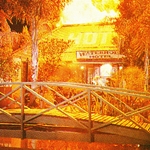 Friday:  In Neighbours (6.30pm, Ten), Ramsay Street rallies in the wake of the explosion at the Waterhole pub (pictured) — and Philip (Ian Rawlings) learns who is to blame for the explosion.