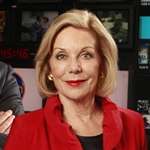 Network Ten has announced that Australian media identity and businesswoman Ita Buttrose AO OBE will be joining the network’s revamped morning line-up. She will be part of the Ten’s new panel-based morning show to launch later this year. The yet-to-be-named program is one of two being developed for Ten by its new Director of Morning Television, Adam Boland …

END_OF_DOCUMENT_TOKEN_TO_BE_REPLACED

Permanent link to this article: https://televisionau.com/2013/06/ten-signs-up-ita-buttrose.html