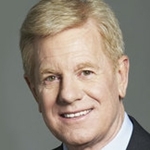 The Herald Sun reports that Ten News presenter Mal Walden (pictured) will be retiring from his role at Melbourne’s Ten News At Five desk at the end of this year.

The announcement marks an end to on again, off again speculation about his long term future in the role.  The 68-year-old has long been speculated to be planning retirement or at least semi-retirement.

Starting this week Walden will front Ten News At Five three nights a week, with sports presenter Stephen Quartermain on the remaining nights.

“Mal’s decision is a sad day for Network Ten, but we are very grateful he has agreed to stay with us until the end of the year. Mal is television news in Melbourne. For the past 25 years, he has brought the big news stories to Ten’s viewers with authority, integrity and passion.

“Simply saying ‘thank you’ is not enough, but thank you Mal. Everyone at Network Ten and all our viewers will miss you and wish you the very best.”

Walden’s media career started in 1961 at Warrnambool radio station 3YB.  His career then took him to Tasmania before coming to Melbourne to radio 3DB.

In 1970 Walden began at 3DB’s sister television station HSV7 with duties including hosting a game show, Jeopardy.  He then became a cadet journalist at the station, getting his big break in 1974 as the first news reporter to land in Darwin after the city had been destroyed by Cyclone Tracy on Christmas Day.

When HSV7 newsreader Brian Naylor dropped a bombshell and announced his defection to GTV9 during 1978, Walden was appointed as the temporary replacement at the Seven National News desk.  Although it was speculated that Seven was seeking to hire someone from another station as a permanent replacement for Naylor, Walden was later formally appointed to the role.  He continued to front Seven National News until he was suddenly sacked by new management when Fairfax took over HSV7 in March 1987.  Ratings plummeted after his departure. Less than a month later Walden was approached by former Seven colleague David Johnston to join him at Eyewitness News at Ten.  Ratings for Eyewitness News hit record highs after Walden’s debut there.  He initially presented the segment Mal’s Melbourne and after a brief stint next to Johnston and Tracey Curro at the news desk he became weekend news reader.

When Johnston moved back to Seven in 1995 Walden was the natural successor to the role.

As well as reading Ten News Walden has also performed other roles at the station including hosting special events such as the Young Achiever Awards, ATV10‘s 30th anniversary celebration and in 2003 co-wrote a history of the station, From The Word Go!! — Forty Years Of Ten Melbourne.

While maintaining his news delivery with authority he has also shown a lighter side to presenting the news — becoming something of a social media “phenomenon” after his on-air struggles with that word went viral as did other unplanned ad libs:

Permanent link to this article: https://televisionau.com/2013/07/mal-walden-stepping-down-from-ten-news.html