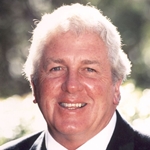 Former Nine Network sports commentator Darrell Eastlake has died at the age of 75.

His media career started in the 1960s, doing surf reports for Sydney radio station 2UW and later worked at 2GO on the Central Coast.

He then moved into television, as a rugby league commentator for NBN3, Newcastle, before joining Nine for its Commonwealth Games coverage from Brisbane in 1982.

His rambunctious style and booming voice was unmistakable while co-hosting Wide World Of Sports and commentating rugby league and State Of Origin, Commonwealth Games, Winter Olympics, weightlifting and motor racing.

He got himself banned from the commentating booth at the 1990 Commonwealth Games in Auckland for his over enthusiastic style.

He retired from broadcasting in 2005 and in 2010 was diagnosed with  Alzheimer’s disease, dementia and emphysema.

Darrell Eastlake is survived by his wife, Julie.

Permanent link to this article: https://televisionau.com/2018/04/obituary-darrell-eastlake.html