Logies: Golden Ray
Midday host Ray Martin has won the Gold Logie for Most Popular Personality on Australian Television at the 35th annual TV Week Logie Awards.  For Martin (pictured with Silver Logie winners Gary Sweet and Georgie Parker), the Gold follows his recent foray into prime-time specials which have been ratings winners.  “The Logies and the Gold Logie — it’s the biggest game in town,” he told TV Week.  “I remember (producer) Peter Faiman saying to someone once, ‘Don’t take it seriously, it’s only an award to sell magazines’.  But it’s more than that.  The public see it as a sign of the times, and yeah, I deserve it, but so do those other three people (Gold nominees Georgie Parker, Daryl Somers and Bruce Samazan) tonight.”  The win is Martin’s second Gold Logie, having won the popular-voted award once before in 1987. 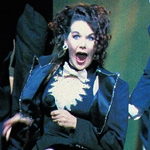 Logies: Showstoppers!
Not even taking a tumble on stage could stop Rhonda Burchmore (pictured) from finishing her dance routine with David Atkins and the Tap Boys.  “I certainly woke a few people up,” she joked.  But after the fall on stage she leapt to her feet and finished the number to receive a huge ovation from the crowd.  Also performing on the night were John Farnham and Tom Jones, singing the AC/DC classic It’s A Long Way To The Top If You Want To Rock n’ Roll, and the Logies’ opening number featured Hey Dad! stars Rachael Beck and Julie McGregor, dancer Todd McKenney, E Street star Kelley Abbey and child guitarist Nathan Cavaleri.  And the crowd also had a standing ovation for host Bert Newton as he entered the stage to begin hosting his 18th Logies.  “I love hosting the Logies and when you genuinely feel that way, I think it makes a difference,” he told TV Week. 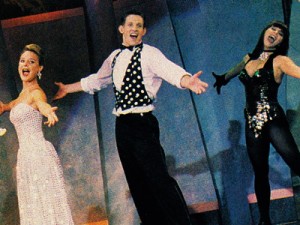 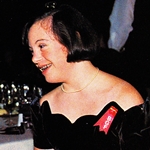 Logies: Tracie wins the heart of a nation
Teenage actress Tracie Sammut (pictured) has been awarded a Special Achievement Logie for her work in the ABC series GP.  Sammut is one of just two actors in the world with Down’s syndrome who have regular roles in a television series (the other is Christopher Burke in US series Life Goes On).  The Australian Down’s Syndrome Association has also paid tribute to Sammut’s contribution in spreading the message that Down’s syndrome is not a barrier to achievement.  In her acceptance speech she had a special message for her father Louis, who was ill in a Sydney hospital, and thanked the ABC “for putting up with me”.

Logies: Tribute to a quiet achiever
From his luxury home in Bermuda, producer Reg Grundy is a quiet achiever, a somewhat elusive man despite his global production empire last year generating more than 2000 hours of TV programming worldwide — and has been acknowledged with entry into the TV Week Logie Awards‘ Hall Of Fame.  A former radio reporter, Grundy started in TV as producer and host of the original Wheel Of Fortune on TCN9 in 1959.  He went on to produce and package game shows in the 1960s and expanded into drama production with Class Of ’74.  Later programs Prisoner, Sale Of The Century and Neighbours gave Grundy an international presence, leading to two recent projects, Scattergories and Scrabble, commissioned by US network NBC.  His company is also a co-producer of New Zealand drama series Shortland Street and is now expanding into South America with a quiz show in production in Chile.  Former Grundy soap The Restless Years has also been adapted for local production in Germany and the Netherlands.  Since the early ’70s Grundy has been married to former model and actress Joy Chambers.  The couple live a quiet life in Bermuda, while sharing an interest in art and antiques — with one of the largest private collections of Australian art in the world. 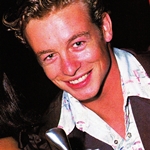 “The Logies victory for Phoenix and other Logies results in the Most Outstanding — or peer judged — categories can and should be interpreted as a huge pat on the back for the ABC, but they also say something about the lack of “quality” opportunities on offer from the commercial networks.  Hopefully the signs of change are there in recent announcements made by the Nine Network, for instance, but there’s no doubt that a pretty sad state of affairs generally still exists.” 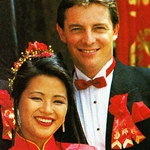 Tuesday:  In a two-hour episode of GP (8.30, ABC), Steve (Michael O’Neill) and Su Lin (Theresa Wong) are wed in a traditional Chinese ceremony (pictured) — but there are obstacles in the lead-up to the wedding, with Su Lin already committed to an arranged marriage and Steve’s parents announce their imminent divorce.  Comedian and actor Billy Crystal hosts the 65th annual Academy Awards in a delayed telecast from the Dorothy Chandler Pavilion of the Los Angeles Music Centre (8.30pm, Nine).  Best Picture nominations are Scent Of A Woman, The Crying Game, Unforgiven, Howard’s End and A Few Good Men.

Saturday:  In Beyond 2000 (7.30pm, Seven), Tracey Curro discovers a US experiment where children learn mathematics by holding jobs, paying taxes and owning businesses.