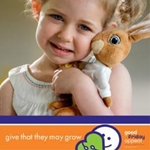 The Appeal, started back in 1931 by the Sporting Globe newspaper, is a tradition embraced by Victorians who support the fundraiser in overwhelming numbers every year.

Seven has been the television partner of the appeal since 1957 and has broadcast an all-day telethon on Good Friday every year since 1960.

This year’s telecast starts at 9.00am and continues through to midnight, breaking only for Seven News (12pm and 6pm) and Today Tonight (6.30pm).  The program is broadcast across regional Victoria through Prime7.

Sunrise‘s Mark Beretta and Winners And Losers‘ Damien Bodie will be keeping an eye on the phone room, while Dean Felton and Rebecca Maddern from Seven News will be keeping viewers up to date with the progressive totals from the country board. 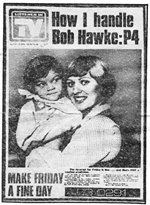 The Good Friday Appeal‘s other media partners are the Herald Sun and radio stations 3AW and Magic 1278.

Donations to the appeal can be made by telephone 1300277325 or via the Good Friday Appeal website.

(Pictured: HSV7 weather girl Debbie Phin with an RCH patient on the cover of Listener In-TV, 1976)

Permanent link to this article: https://televisionau.com/2013/03/good-friday-for-the-kids.html