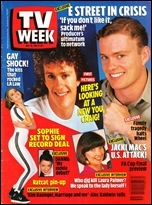 “If you don’t like it, sack me!”
A major row has erupted between the producers of E Street and Network Ten executives over controversial episodes set to air later this month.  In the episodes, Harley (Malcolm Kennard) is introduced to cocaine by a friend of Sheridan (Kate Raison) and ends up in a raunchy sex scene with two girls and collapses from an overdose.  Network executives have said the episodes are not suitable for the show’s 7.30pm timeslot, and may be stopped from going to air.  Producer Forrest Redlich is determined for the episodes to go to air after seeing a friend of his suffer from cocaine abuse.  “I have a mate who’s just had a really bad thing with cocaine,” he told TV Week.  “He is 45.  He had a really good business happening, made a lot of money and put half of it up his nose.  It’s bad news.  Basically, the episodes have caused a ruckus with Ten.  I’ve pulled rank on them and said, ‘That’s the story.  I want to do it.  If you don’t like it, sack me’.” 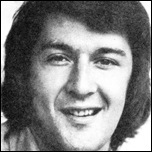 Aussie lands US soap role
Former Number 96 star Chard Hayward (pictured), who has lived in the United States since the series ended in the late 1970s, has recently completed a role in NBC daytime soap opera Santa Barbara.  Hayward, who played camp movie buff Dudley Butterfield in Number 96, plays the role of nightclub singer Richard Sedgewick.  The character has a short life in the series but Hayward is not disappointed at the character being killed off.  “I really do not want to do these shows for 50 weeks a year,” he told TV Week.  “I need to have space to pursue my other interests.” 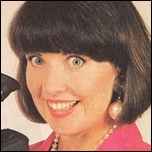 Briefly…
Australia’s Funniest Home Video Show host Jacki MacDonald (pictured) is about to be seen by millions of American viewers when she takes part in a segment on America’s Funniest Home Video Show.  “It’s going to be very international,” she told TV Week.  “Bob (Saget) is also interviewing the hosts of the other Home Video shows from other countries.”  There are currently 12 different versions of the show around the world.  But MacDonald is not expecting it to lead to any further job offers from the US.  “I don’t think they’d employ me,” she said.  “The English told me that once, when I was over there years ago.  They said, ‘you’re very intelligent and very funny Miss Marsupial, but we don’t want you’.”

Wheel Of Fortune host John Burgess has recently quit his radio job at Perth radio station 6PM and has ambitions to take on a more serious role.  “You can’t go on being a clown all your life,” he said.  “Before I die I’d like someone to take me seriously, too.  I’ve had this ambition in the back of my mind to read the news on television.  It will take me at least twelve months just practising reading the news.  Seven are being very helpful – I feel this is my network, this is my home.  But if the newsreading comes off, I would probably have to leave Perth and go to Sydney or Melbourne.”

After months of mystery, Australian viewers will this week find out the answer to the question “Who killed Laura Palmer?” in the popular US series Twin Peaks, seen here on Network Ten.

John Laws says…
”In a recent Fast Forward episode, Steve Vizard was responsible for a brilliant send-up of game show host Rob Brough.  In much the same way as he captured and lampooned the Hinch image, Vizard used his talent for impersonation to not only bring Brough to life in physical form, but to satirise him and the Family Feud show in an incredibly funny way.  There are those around who claim that despite the enormous success of his Tonight Live show, Vizard is better suited to the satirical sketch format of Fast Forward.  It’s not a theory that I complete agree with, but judging by some recent Tonight Live shows, there may be a grain of substance.  Not that Vizard’s late-night antics are second-rate television.  Far from it.  The show can – sometimes – positively sparkle, and it makes for a thoroughly entertaining hour.  Yet, on other occasions, it seems to flounder, and never more so than when Vizard is “off the boil”.”

Monday:  Ten Eyewitness News is reinstated to a one-hour bulletin, with newsreader Jo Pearson returning to the newsdesk, three years after leaving Ten to go to the Nine Network, alongside David Johnston.  Greg Evans’ game show Blind Date moves from 6.30pm to 5.30pm and is now lead-in to Ten’s revamped news hour.  Noah Taylor and John Jarratt are among the local co-stars to feature in the telemovie Inspector Morse In Australia (Seven).  ABC presents the final episode of The Life And Death Of Sandy Stone.

Friday:  Seven crosses to Football Park, Adelaide, for the AFL match between Adelaide Crows and Melbourne.