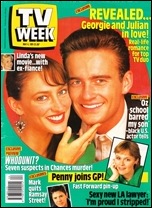 It all started with Love Letters
Love has blossomed between two of television’s most popular stars.  Julian McMahon, formerly of Home And Away, and A Country Practice’s Georgie Parker have been inseparable since they performed together in the theatre production of Love Letters.  Although the pair (pictured) have said little about their relationship, their affection for each other was obvious at the recent TV Week Logie Awards and they are often seen out together around Sydney.  “We are not prepared to make any comment at this stage,” Parker tells TV Week.  “We are just good friends,” said McMahon.

‘It’s time to move on…’
Neighbours is about to lose one of its most popular characters as Mark Little, who plays Joe Mangel, has decided not to renew his contract.  A Network Ten spokesperson told TV Week: “Mark has been with the show since June 1988 and I think he feels it’s time to move on.  As with any ongoing drama, it’s the nature of the production that cast members have to leave.  Inevitably they are replaced by new actors who are hopefully just as talented.”  Little, who also formerly starred in The Flying Doctors and co-hosted ABC’s Countdown Revolution, is set to perform a season of stand-up comedy in Sydney and is also promoting the movie Nirvana Street Murder, in which he stars with Ben Mendelsohn.

Carmel’s ‘horror movie’
Beyond 2000 reporter Carmel Travers has returned from India, Turkey, the United Kingdom and South America, where she found the body-parts trade is big business.  “India is basically the organ bank for the rest of the world,” she told TV Week.  “It’s so easy to acquire an organ there.”  Travers’ story, to appear soon on Beyond 2000, says the lure of cash is leading to young men to sell their organs.  “Every young man has sold a kidney or intends to do so,” she said.  “The promise of 20,000 rupees (around $A2000) for a kidney is too alluring.  Eyes are worth 80,000 rupees.  But it is not just a kidney and eye trade we are talking about – it is a trade in skin, bones and ligaments.  Poverty and ignorance can drive people to do the most amazing things.”  Travers found that it wasn’t just India where body-part trading is rife, with certain operations to remove body parts for trade also taking place in the United Kingdom.

Briefly…
ABC will this week air the Film Australia telemovie Act Of Necessity, a moving story of a mother’s search to prove her dying daughter’s leukaemia and the spraying of insecticides are connected.  The telemovie is not scripted – the actors’ dialogue was improvised, the result of two weeks of workshopping the characters and researching by spending time with the real people of the communities.  The telemovie stars Angie Milliken, Mark Owen-Taylor, Wendy Strehlow, Scott McGregor, Paul Sonkilla, Lauren Hewett and Steven Grives. 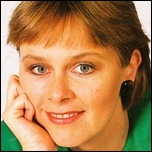 E Street star Penny Cook (pictured), who recently left the series for an extended break, has just signed up for a ten-week guest role in ABC’s GP.  The guest appearance has slimmed any chance that Cook will return to E Street this year, meaning that the pending nuptials between Dr Elly Fielding and Reverend Bob Brown (Tony Martin) are likely to be left waiting even longer.

The Nine Network’s Chances this week sees character Eddie Reynolds (Dennis Miller) brutally murdered, leaving a trail of deceit, blackmail and fraud.  With seven key character suspected of the murder, viewers and even the show’s cast and crew have been left guessing who did it.  Six different storyline endings have been filmed, and even the actors don’t know yet which one will be played out.  The answer will be revealed on the series this week. 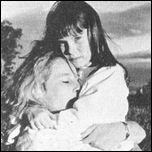 Lawrie Masterson’s Sound Off:
”Film Australia has developed a rather expert knack of taking a social issue, wrapping it in a telemovie format, then simply spreading it out in front of us, no frills.  Previous efforts on thorny subjects such as custody of children, racial prejudice and the battle to keep a family’s head above the mortgage waterline all have been applauded and awarded.  The latest, a telemovie called Act Of Necessity (featuring Angie Milliken and Lauren Hewett, pictured), deserves the same.”

Monday:  In A Country Practice (Seven), Cookie (Syd Heylen) becomes ill when he hears the taxman is visiting the district.  Farmer Dave Watson (Don Reid) offers his property to recreational shooters, despite warnings from his son and ranger Trevor Jackson (Michael Watson). 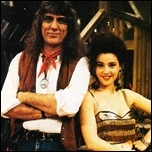 Wednesday:  ABC screens telemovie Act Of Necessity.  In Hey Dad! (Seven), Nudge (Christopher Truswell) falls in love, while the rest of the household learn to live with a new burglar alarm.  Nine presents a late-night delayed telecast of the Sydney Rugby League State Of Origin game between New South Wales and Queensland. 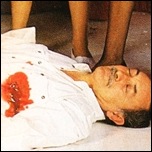 Thursday:  The murder of Eddie Reynolds (pictured) in Chances (Nine) leads to the family being questioned by police.