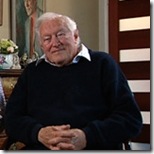 Actor and producer John McCallum, co-creator of the iconic TV series Skippy The Bush Kangaroo, has died in a Sydney nursing home at age 91.

Born in Brisbane in 1918, McCallum was trained at London’s Royal Academy of Dramatic Art before a career that included stage, film and television in both the United Kingdom and Australia.  In the mid-1940s, McCallum met actress Googie Withers and the pair were later married and would work together on numerous occasions during their married life.

In 1958, after a decade in the UK, McCallum returned to Australia to run theatre company JC Williamsons.

By the mid-1960s, McCallum had produced the popular Australian film, They’re A Weird Mob, based on the book about an Italian immigrant settling into life in Australia.

The success of the film led to McCallum and producer Lee Robinson to devise an Australian-based TV series that would have wide international appeal.  Their co-creation would become Australia’s first global television hit, Skippy The Bush Kangaroo.  (Although McCallum later credited Robinson for being the brains behind the concept, devising the show’s premise around a boy and his pet kangaroo and for naming the pet Skippy)  The children’s series put an Australian twist on a well-travelled genre of overseas shows to feature multi-talented animal characters, such as Flipper, Lassie and The Littlest Hobo, and was sold to over 120 countries including syndication throughout the United States.

Forty years after production on Skippy ended, the series is still shown on a semi-regular, late-night basis on the Nine Network.

John McCallum is survived by wife Googie and children Joanna, Nicholas and Amanda.